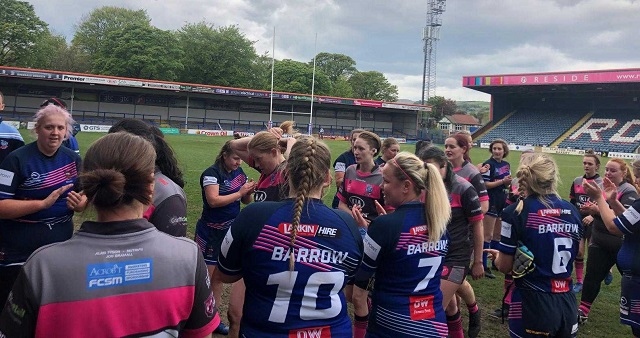 Rochdale Hornets Women’s lost their first home game of the season, going down valiantly to a much more experienced Barrow Raidettes side.

Barrow, who play a level above in the RFL Women’s Championship, ran out 56-12 victors after a hard-fought game at the Crown Oil Arena on Sunday 5 May.

Hornets began the game well, showing a huge improvement in defence and holding Barrow at bay, but could not stop repeated attacks from their opposition.

Hornets Women were playing just their third game together, while Barrow have two years’ worth of experience, and eventually their greater experience and skill told, with the visitors running in several consecutive tries.

As in their previous games with Hull KR and Halifax, the Hornets Women fought to the end and got some reward, scoring late tries as a consolation.

While Barrow were good value for their 56-12 victory, Hornets can be proud of their efforts, particularly Katie Stephens and Armani Khaliq, who were named Players of the Match.

The Hornets women can take solace from the experience of playing a side from the league above and build on it when they return to league action next week against Whitley Bay Barbarians.

The game will kick off on Sunday at 2pm at Rochdale Mayfield ARLFC and all are welcome to come down and cheer on the girls.

The team are always on the lookout for new players and any interested parties are invited to join the girls for training on Mondays and Thursdays from 7pm at Mayfield Sports Centre.