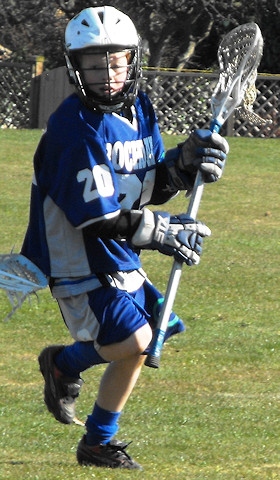 Several members of the Rochdale Lacrosse Club are destined for a bright future, having been chosen for the national England team playing in the European Championships this summer, and the national U19s Academy.

First team player Daniel Madeley, 18, will be joined by A team members Tom Teal, 17, Alex Halliday, 17, and Josh Croney during the Euro U20s Championship in Prague over June and July.

Meanwhile, Charlotte Madeley, 14, of the U15 A team, has been selected for the national U19s academy programme after playing extremely well at the county tournament trials.

Lacrosse has a rich and extensive history in Rochdale, having been played since 1888. Rochdale Lacrosse Club is one of the five eldest clubs in the UK.

In 1876, Queen Victoria witnessed an exhibition game and was impressed, saying ‘The game is very pretty to watch’. Her endorsement was enough for many English girls' schools to adopt the sport in the 1890s.

By the 20th century, many high schools, colleges and universities had adopted Lacrosse as a league sport. Lacrosse became an Olympic sport for the 1904 and 1908 summer Olympics but was then dropped as an official sport.

After 1908, lacrosse was a sport in the World Games.