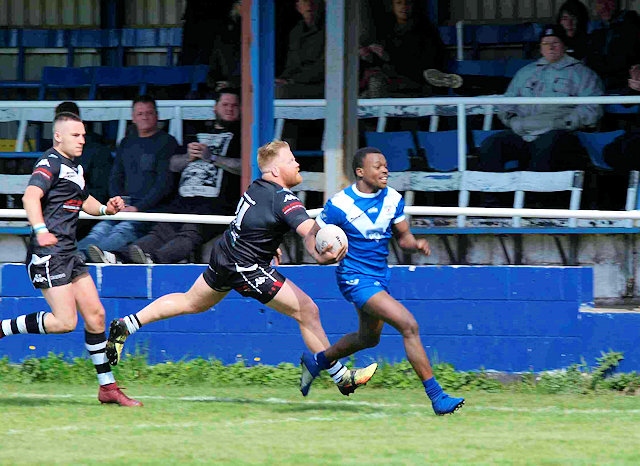 Munya Samanyanga, Rochdale Mayfield, on his way to the line

Mayfield saved their worst performance of the season for their first home game in weeks, going down to a workman-like Siddal side who played patient and controlled rugby league to ease to victory.

The visitors opened the scoring on nine minutes after full-back Wayne English and winger Munya Samanyanga, both otherwise outstanding in the game, failed to communicate on a Siddal clearing kick and got trapped behind their own line.

In the subsequent set Siddal passed wide and right to benefit from good fortune as a pass was knocked up in flight by the defence, and they scored in the corner for 0-4.

Mayfield tried to hit back, working their way upfield where Luke Fowden was held up over the line after a neat inside pass from Cole Connolly.

Mayfield were matching their opponents’ stride for stride, and even when Siddal broke the line after 20 minutes, Mayfield's hard-working scramble defence applied enough pressure to stop the attack.

On 30 minutes Mayfield again pressured the Siddal try line, and Cole Connolly took advantage of a quick play the ball to dive over from acting half back which Zac Baker converted for 6-4.

That was as good as it got for the home side, as for the next 30 minutes, they lost discipline and structure.

First the visitors took advantage of Declan Sheridan jumping out of the defensive line to score, then the inside defenders dropped off and they scored again for 6-16.

Zac Baker compounded the damage with dissent to the officials earning him ten minutes in the sin bin that straddled half-time.

On the restart Mayfield were still in the game but a failure to kick on the last gave up field position and the visitors scored.

An Aidy Gleeson error followed by a Mark Biggins penalty resulted in a successful Siddal kick.

Mayfield lost their way, Luke Fowden going to the bin for dissent, and by contrast, the Siddal halves took control gaining ten more points for an unassailable 6-34 lead after 60 minutes.

The afternoon was brightened up on 62 minutes by a special try from Munya Samanyanga.

Wayne English took a long kick on the full and ran strong into the chasers, drawing and passing to Lewis Butterworth who tipped the ball onto the flying winger who left the cover for dead and sped away from the fullback to score in the left corner, Zac Baker again converted for 12-34.

Poor play gave Siddal the opportunity to score another brace, for 12 - 46, before Mayfield finally returned to early season ways to score. A Declan Sheridan scoot from dummy half after quick play of the ball with support, and Jack McConaghie followed up strong straight runs by Sean Mulcahy, Zac Baker and Nick Hargreaves to score a try converted by Aidy Gleeson for a final score of 24 - 46.

Despite recent disruption in the ranks, the 'middle' 40-minute period performance was out of character for the 2019 Mayfield team, and coaches Sam Butterworth and Steve Wood will hope to return to the honesty and graft shown earlier in the season - earning the right to play wide, that paid dividends.