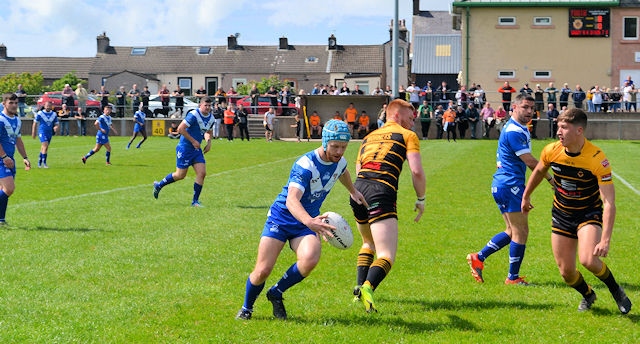 A disjointed performance from Mayfield saw them go down at Wath Brow on Saturday (18 May): the Rochdale side had a poor first half, showing little of what they are capable of.

There was no aggression and players were dropping tackles, something that cannot be done at this level of rugby.

On the few occasions they stuck to the game plan, they competed on level footing, with their top-of-the-table opponents showing that even after losing key players, they still have the ability to do well in this division.

New signings James Mills and Tod Whittle had useful debuts and look like they will adapt well to this higher standard of rugby.

Wath Brow started strongly, and Mayfield allowed them the time to settle in to fast open style of play, letting players up out of the tackle too quickly and failing to push up in defence.

The home side capitalised on this and had three tries on the board before Mayfield even got going.

It would have been worse but for a brilliant try-saving tackle from Munya Samanyanga, holding the prop up over the line.

Shaun Hurley helped to turn the tide as he stole the ball in the tackle and made great yards towards the Brow line. John Stott then showed a touch of class as his kick wrong-footed the defence and he slipped through to touch down; Cole Connolly converted.

Mayfield had a good spell then and, with a bit more luck, could have had another try before half time. This would have put a different complexion on the game. It was not to be though: Wath Brow regained possession, threw the ball wide and scored in the corner.

Coach Sam Butterworth allowed his frustrations to show in his half-time talk, raking his charges over the coals for their failure, not to play rugby, but in not following the game plan. There is little doubt that if they had they would have stayed within touching distance of their hosts.

The second half saw Mayfield take heed of the coach's words and, apart from a sneaky score, they competed with Wath Brow, they had a strong 25 minutes and looked like they were going to stage a revival.

A great passage of play was rewarded as Rob Kershaw rolled back the years to find the space to grab a score back for his team, Connolly converted.

Mayfield looked strong and seemed like they would narrow the gap but with 15 to go, they lost the ball on the Wath Brow line, and quick play allowed them up field for a converted try.

This try took the wind out of the Mayfield sails and they visibly faltered.

Wath Brow capitalised on this and sped up the play, Mayfield looked beaten at this stage and they couldn't keep out the big forwards as they crashed through for two more scores for a score line that flattered them a little at 38 - 12.

Although disappointed at the final score, Coaches Butterworth and Wood thought there were enough positives from the game to build on for next week.

There were five changes from last week’s side and the team looked a little disjointed. The introduction of Kershaw had a positive effect, calming the side down and adding his years of experience to a young team.

James Mills and Tod Whittle did well, as did Nick Hargreaves and Hurley in the forwards.

Connolly Dec Sheridan, Wayne English and Stott were the pick of the backs and Sheridan picked up the MOM for a non-stop show.