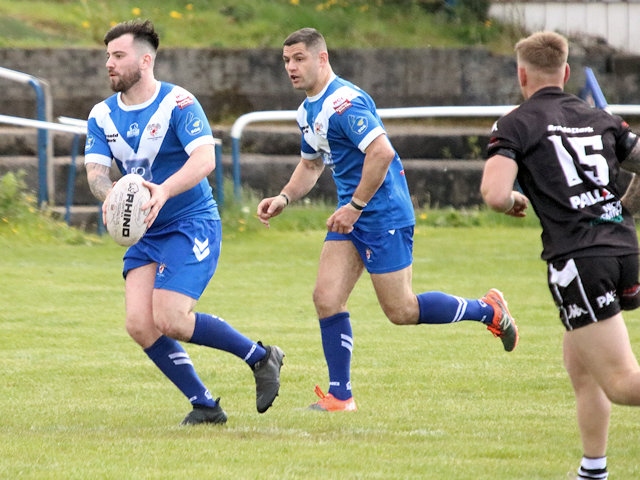 With a long trip on the cards and several cry offs for the three-hour trip, this was always going to be a tough one for Mayfield. It has to be said though, that the score truly does not represent the game.

Mayfield had four real opportunities to score that were lost, be it either from dubious refereeing decisions, or a failure to finish, they never looked like winning the game but put in a very credible performance in the face of adversity.

The Cumbrian sides are always known for being strong in the forwards and if you don’t match them you are going to struggle, the fact that three of last week’s pack declared themselves unavailable before the game meant that Mayfield were always on a hiding to nothing.

The lads that came in showed up well, with Harry McDonald at hooker showing some real touches of class.

Liam Whalley at loose forward had probably his best game of the season with a real powerhouse of an effort.

Mayfield matched the home side blow for blow for the first 15 minutes, but a lapse of concentration changed the course of the game and once Egremont got on top they never looked like losing their grip.

Three tries in an eight-minute spell sealed the fate of the game for them.

At 16 - 0 Mayfield looked like a defeated side, but they showed real spirit and tenacity to stage something of a comeback and stem the Cumbrian onslaught.

Whalley, Luke Fowden, Rob Kershaw and Andy Taylor worked overtime as they put their bodies on the line time and again in the middle of the park, while out wide Wayne Bannister, James Mcdaid and Lewis Butterworth were busy as well.

Cole and Cameron Connolly formed a good partnership at halves, and it was their industry that that gave debutante, Harry McDonald, the position to put big Shaun Hurley in for his side's only try of the day, converted by Cole Connolly, 16 - 6.

Mayfield competed for the rest of the first half and were very unlucky not to put more points on the board as Wayne English had two efforts disallowed, one a very contentious decision.

The home side edged their way back on top, but again strong defending from Mayfield kept them out, McDaid and Biggins in particular working hard. Right on the half-time whistle a quick play of the ball from Egremont caught out a scrambling Mayfield defence and they squeezed over for a converted try to make it 22 - 6 as the whistle blew.

That was the killer blow for the Mayfield side.

Mayfield came out in the second half and gave it everything for twenty minutes, they matched their opponents and were unlucky on two more occasions as they were pulled back for forward passes, both of which on a different day could been given.

Egremont fought their way back and a mistake on the last tackle from the Mayfield defence saw them sneak in at the corner, 26 - 6.

Mayfield continued to probe whenever they could with McDonald and the Connolly brothers prominent, but the big home pack snuffed out all their attempts to get back in the game.

Mayfield’s difficulties were compounded further when Taylor was sin binned for the most innocuous of offences, so much so that the referee actually apologised later saying 'I think I was a bit harsh there'.

Whilst Taylor was off, he also binned Biggins for a high shot which, again, was borderline at worst.

At 22 - 6 down to 11 men most teams would have caved, but not this Mayfield side, they upped their efforts and showed a fantastic pride and spirit.

The home side managed the final score of the game, converted to make it 32 - 6 but Mayfield played a big part in this game and showed that with the players they have to come back it is only a matter of time before they get back to winning ways.

Wayne Bannister took the Man of the Match, but he was pushed all the way by Liam Whalley, while Cameron Connolly and Harry McDonald both had impressive games.