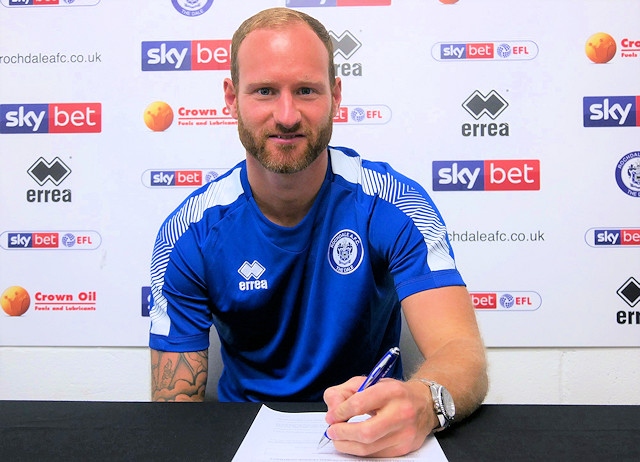 Matty Done has extended his stay at Rochdale AFC.

The 30-year-old, who was out of contract this summer, has put pen to paper on a new two-year deal.

Done has had a long association with the club, having first joined Dale in 2010. He went on to join Barnsley a year later, but after a two-year stint at Oakwell, he returned to the Crown Oil Arena in the summer of 2013

Following a highly successful period, including being part of Rochdale’s promotion winning side to League One, Done left the club during the January transfer window in 2015 and joined Sheffield United for an undisclosed fee. He was part of the Blades squad that clinched automatic promotion to the Championship at the end of the 2016/17 season.

It was during that summer that Done re-joined Rochdale and he has been an ever-present since then, including playing 43 times during the 2018/19 campaign. He has now made 210 appearances in total for the club.

After putting to paper, Matty Done commented: “I’m really looking forward to getting back into it when we return for pre-season training on Thursday. It has been a long summer away from the club and I’m delighted to have got the paperwork signed before pre-season starts.

“I spoke with Brian [Barry-Murphy] at the end of last season about my contract and I was always going to sign it. I’ve had a busy summer being away with the family and doing my coaching badges, so it was just a case of trying to be back in Manchester to get it all done and over the line.

“Brian was a major factor in me signing for another two-years, that and being able to work with him, Lee [Riley] and the other staff going forward. Everyone got a taste of their management skills towards the end of last season and the amazing job he, along with the rest of the staff, did to get us over the line with games to play.

“He’s had all summer to do things his way and really put a stamp on how he wants us to play. Having spoken to him throughout the summer, I’m just thoroughly looking forward to getting going again.”

Manager Brian Barry-Murphy added: “Matty has been with us for a long period of time over a number of spells but I don’t think his loyalty or commitment to the club should be taken as complacency in the fact that he’s happy to stay. He retains a great hunger and an ambition that appeals to me, and that’s one of the main reasons that I wanted to secure his services.

“I see him very much as part of our attacking unit and he remains a very important part of what we do as part of that attacking unit. Towards the end of last season, we identified a lot of trends that saw him being involved in a lot of our goals and attacking movement, so we’re very, very keen to retain and enhance that.”