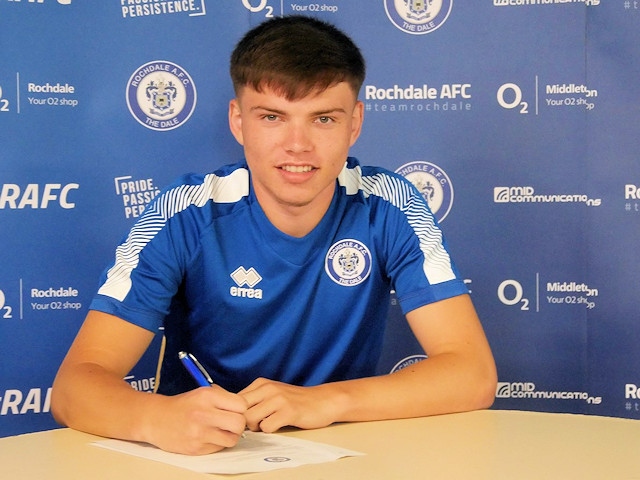 Former academy graduate Aaron Morley has signed a new three-year deal with Rochdale AFC, keeping him contracted at the Crown Oil Arena until 2022.

Morley initially joined Rochdale at under-16 level, before signing scholarship terms in 2016.

He made his first-team debut at the age of just 16 and signed a professional contract in March 2017 following his 17th birthday.

The midfielder was instrumental in the Youth Team winning the EFL North West Youth Alliance League title in 2017/18.

His contract was due to expire this summer, but despite interest from other clubs, the youngster has committed his long-term future to Rochdale.

On signing his new deal, Morley said: “It’s great. I’ve been here four years now and to extend for another three years is just a dream come true.

“Brian Barry-Murphy was a huge factor in me deciding to stay, 100%. I’ve had offers from other clubs but I wanted to play here. I believe in Brian, I believe he’s going to give me my chance and I just need to take it.

“This next season is a big one for me. I just need to show him [Barry-Murphy] that I can do it, and hopefully by next season I can be a regular starter.”