Football: Rekeil Pyke returns to Dale on loan from Huddersfield 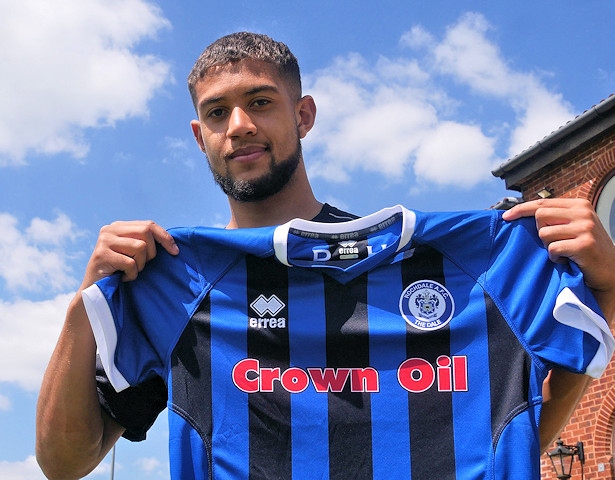 Forward Rekeil Pyke has returned to the Crown Oil Arena on a season-long loan from Huddersfield Town.

The move sees the 21-year-old link back up with manager Brian Barry-Murphy, following a short spell at Rochdale last season, also on loan from the Terriers.

Having picked up an injury early in his time at Dale, he went back to his parent club for treatment, but returned to the side in time for the all-important run-in. He featured in the team’s last four games of the campaign, which resulted in three victories, ultimately securing League One football for the 2019/20 season. He made six appearances in total.

Pyke came through the youth ranks at Huddersfield Town, having joined the club when he was 11 years old and was offered professional terms in 2015.

Since then, he has gained valuable experience while out on loan at Colchester United, Port Vale and most recently Wrexham AFC, where he returned for a second spell at the start of the 2018/19 season before joining Rochdale at the end of January.

Pyke commented: “I enjoyed my time here last season. It was a good experience for me, and it ended in us staying up in League One. The lads were great with me, so I’m really pleased to be back.

“I want to hit the ground running. I’m looking forward to the week in Portugal and getting started.”

Manager Brian Barry-Murphy added: “We believe Rekeil adds a different dimension to our attacking play and he has a list of skills and qualities that are unique. We are very happy to have him back.

“He came back to the club towards the end of last season having had a very bad hamstring injury and his commitment to the cause was amazing, when a lot of players would have been happy to stay at their parent club.

“The atmosphere in the dressing room upon his return has been exceptional, which tells you the stature that he holds within our dressing room.”