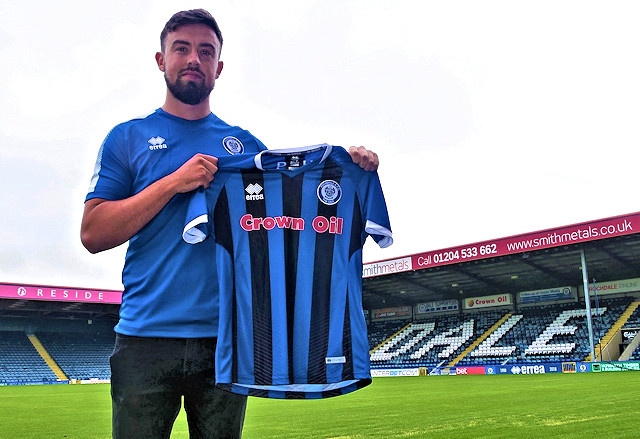 The 23-year-old turned down offers from other clubs to join Dale.

O’Connell arrives at the Crown Oil Arena from Bury, where he played 35 times for the Shakers last season as they clinched automatic promotion to League One.

The Irishman started his professional career at Celtic, having moved there when he was 16. After graduating from their Academy, he went on to make 13 first team appearances for the Scottish Premier League side, including featuring in the Champions League.

During his six years at Parkhead, he spent time out on loan at Oldham Athletic, Walsall and his hometown club, Cork City.

He has been capped by the Republic of Ireland at U19 and U21 level.

O’Connell said: “I’m looking forward to working under Brian Barry-Murphy and I’m delighted to get the deal done. I’ve known Brian for a while and it’s very exciting what he’s trying to do here.

“He was a huge factor in the move, to be honest, and I couldn’t wait to get the deal done.

“I think we’ve got some very good players here as well, so once we get through pre-season and get started, hopefully it will be a good season.

“Everyone I’ve spoken to has said how good a coach he [Barry-Murphy] is, and I’ve seen how good a job he did when he took over as manager last season. It just shows the ability he has, and obviously the lads did brilliantly as well.

“I’m an ambitious person, as is Brian, and with everyone working together, hopefully we’ll go as far as we can.”

Manager Brian Barry-Murphy said: “I’m ecstatic to have been able to secure the services of Eoghan. It’s a position [right-sided centre-half] that we’ve been very conscious that we needed to recruit in.”

“That was the number one priority, and Eoghan was the number one target. If I’m being honest, for a lot of the summer, I didn’t think we would be able to acquire him, but the fact that it has come to fruition is testament to his commitment towards us.

“There were a lot of opportunities for him to go elsewhere and no doubt there were better financial options, but he’s shown a hunger to come and join our club. He also has an admiration for a lot of our players, which is very exciting.”