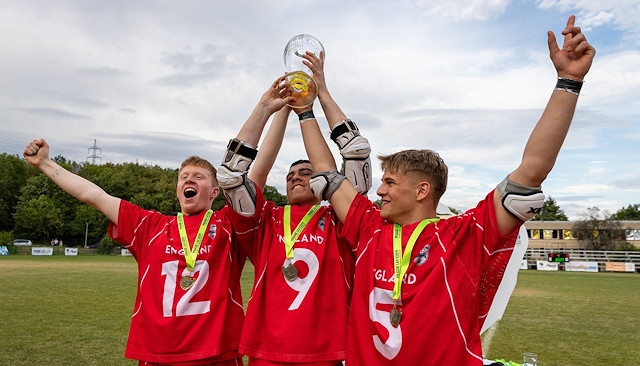 England, including Rochdale's Alex Halliday (no. 12, left) celebrate their win

Three Rochdale Lacrosse club players and the rest of the England squad have been named this year’s champions of the inaugural LAX U20s European Championships after beating Germany 8-9 on Saturday (6 July).

The team, which includes Rochdale players Daniel Madeley, 18, Tom Teal, 17, and Alex Halliday, 17, clawed their way to victory in the final two quarters, where they scored seven goals.

England pulled off a sensational comeback win to beat undefeated Germany 9-8 after trailing 2-5 at half-time. A stunning second half performance saw the youngsters overhaul the deficit and take the trophy against the odds.

Germany had beaten England 14-5 in the pool stages and were undefeated coming into the final, while England had battled past Ireland in overtime in the semi-finals to make the showpiece game.

And Germany started the better side in the final, taking a 1-3 lead at the 1/4 time interval.

The game had been fairly even in terms of possession, Will Shirt scoring England’s first, but the Germans had been much more clinical in front of goal and made their opportunities count.

The task got even harder when Germany were first on the board after the break, pouncing on a rebound after a good save from Sam Rogerson.

And even when Josh Simpson-Pink pulled one back, we were unable to make a spell of pressure count and Germany hit on the counter just before the half to make it a 2-5 game.

After a quiet first-half, Dan Jones was ready to stamp his mark on the match and with a determined back-to-goal drive and a trademark snipe finish, pulled one back.

Then a few minutes later, a mazy run from Elliott Bickerton and an inside roll ended with a pass across goal to an open Danny Hilditch tip-toeing the crease and the score was 4-5.

However, Germany seemed to develop a knack of always responding just as England got back in touch.

Immediately after the Hilditch goal, Germany pushed the lead back out, and after Alex Halliday was first to a rebound to score, the response came again within a minute to make it 5-7.

Simpson-Pink replied with a jump shot finish to bring it within one heading into the final 15 minutes to set a grandstand finish.

England’s levels had steadily risen throughout the game making scoring for Germany ever tougher and the ball movement up top was becoming slicker.

And with, it seemed, the wind in their sails, England made a bid to take control.

The groundball battle has been intense all game but come Q4, England were impeccable in winning almost all the 50/50s and it was a loose ball around the German goal that Hilditch pounced on first and tied the game.

From that point, England were in the ascendency, German heads were down and England made it count.

Dan Jones, as he so often has in these latter stages, pulled it out of the bag with two more goals giving England the lead for the first time at 9-7.

The last five minutes became a backs to the wall job but the defence and Sam Rogerson in goal stood tall.

Despite a German goal with less than 3:00 to play, once Rogerson pulled off a smart save with less than a minute to go, the game was done and wild scenes followed.

The win marked a remarkable achievement for a side younger than many of their opposition players, with all the England squad eligible for next year’s U19 World Championship; and a European title at this stage is a real positive with next year now in sight.

This year’s contest was the first ever European Lacrosse Championship for the U20 Men with the English U20s team made up of players from 12 different clubs across the country.

Read more about the team’s performance at the European Championships here: