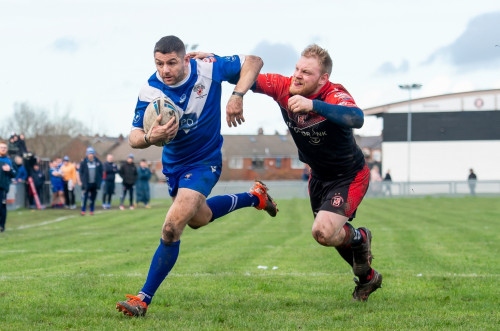 This was a must win game for two teams at the wrong end of the table, and it was Leigh Miners who showed the attacking prowess to take the spoils, despite the defensive efforts of a Mayfield team who refuse to go down without a fight.

A large group walked from Rochdale to the Miners Twist Lane ground to raise funds for seriously ill friend and team mate Tony Parker and the weather was kind to them and the players as the game was played out in warm sunshine - which signalled that a good passing game would bear fruit.

This was certainly the case early in the game for Mayfield as after five minutes, on their first foray into the Leigh Miners twenty metre zone, Cameron and Cole Connolly combined to find Jack McConaghie and he put Munya Samanyanga in at the corner, too wide for Cole Connolly to convert.

Mayfield couldn’t make the most of that advantage though and conceded a penalty from the restart, then allowed the home side in from their own wide passing.

Mayfield then compounded the problem facing them by missing tackles to concede field position and Leigh scored an easy try as a forward went in untouched on the line.

10 - 4 after just ten minutes and the game settled down a little.

Mayfield had the better of the play, but didn’t have the attacking flair to find gaps in the resolute Miners defence.

On 28 and 32 minutes the home side were clinical in their attack each time they approached the Mayfield line, and took two tries for a 22 - 4 lead.

Mayfield’s effort could not be faulted though, and it was typified by Nick Hargreaves who powered over for a try on 36 minutes to give Mayfield some hope, going to the break at 22 - 10.

The visitors stared brightly again and despite having a try appeal disallowed early on, they cut the deficit to a converted try, when the ever-lively Wayne English, sliced through the defence for a Cole Connolly converted try.

Mayfield were again defending strong, but were unable to find the direction to score the points needed, and Leigh took advantage to open the gap to seven points with a well taken drop goal with a quarter of the match left.

Mayfield needed to score next, but calamity when trying to deal with an attacking kick into the in-goal, led to a try and 29 -16 lead to the hosts.

Mayfield tried to hit back, but the Miners defence held strong until Wayne English grabbed his second try on the full-time whistle for 29 - 22.

Mayfield competed and their effort could not be faulted, but they were left to rue their lack of composure when attacking and failure to find the right options to get the points needed.

There is a long way to go in the league though and plenty of points up for grabs.

Best for Mayfield were the quality forward efforts by Nick Hargreaves and debutant James Tilly, who put in an impressive 80-minute stint.

Although Wayne English scored two tries, hw was pipped to Man of the Match award by the dependable Declan Sheridan.