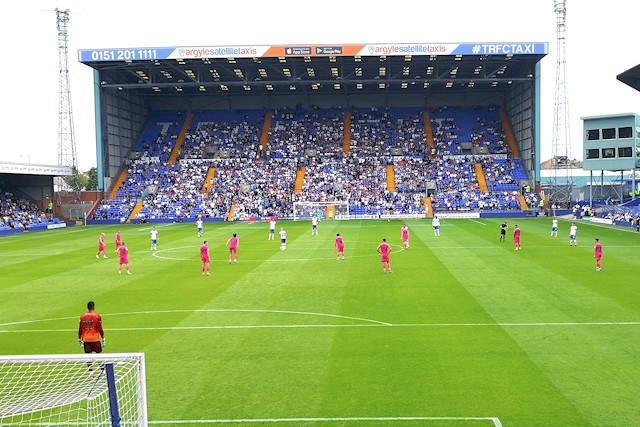 Rochdale made a winning start to the new League One season after a comprehensive performance against a Tranmere side still buoyed after gaining back-to-back promotions in the last two seasons. Ian Henderson netted Dale’s first from the penalty spot after Callum Camps was upended after just twelve minutes with the captain doubling his tally straight after the interval with a sublime chip into the top corner. Rhys Norrington-Davies scored a third on his debut after a wonderful passing move involving several players.

Nerves were jangling at the end when Stephen Dooley scored a bizarre own goal in the 89th minute and when Connor Jennings' deflected shot made it 3-2, tempers flared. Tranmere substitute Rushian Hepburn-Murphy dragged Dale's MJ Williams to the floor right in front of the referee giving the Cumbrian official no choice but to show a straight red card and Dale held on for maximum points.

The opening day of a new season is always something to look forward to and with it all the optimism that football brings. Brian Barry-Murphy was beginning his first full season in charge of Rochdale and he had three debutants in his starting eleven. Goalkeeper Robert Sanchez and defenders Eoghan O’Connell and Rhys Norrington-Davies were all given the nod against a Tranmere side who had high expectations of their own heading into the game.

Micky Mellon’s Tranmere side, started well with Dale struggling to get hold of the ball as last season’s League Two playoff winners looked to get off to a perfect start. Former Dale midfielder David Perkins was the first to have a shot in any real anger; but his effort went straight into the gloves of Sanchez.

Rochdale started to get their passing game going and in their first foray forward, they won a penalty. Dooley’s drive down the left fed Camps inside the box and when the 23 year old turned, he was brought down by George Ray. Henderson stepped up to coolly send Davies the wrong way for his first of the season.

Dale were playing the better of the football, although Tranmere looked the more likely to score and it was Dale’s keeper who had the busier half. Stefan Payne, making his Tranmere debut forced a low save from Sanchez whilst a mistake from O’Connell gifted the ball to Payne; Sanchez was quickly out to block the danger.

Henderson almost made it 2-0 when he hit a Jimmy Keohane ball first time; his shot going narrowly wide of the left hand post.

Payne was proving to be a handful and when he burst past McNulty but Sanchez once again denied the striker with an outstretched right foot.

Barry-Murphy’s side continued to play their football at the start of the second half and within three minutes doubled their lead. A right wing corner was only partially cleared and when Camps and Williams exchanged passes inside the box, the ball was fed to Henderson who from a narrow angle just lifted the ball over the keeper and into the far top corner.

Tranmere replaced their front two at the interval with another two debutants, Morgan Ferrier and Rushian Hepburn-Murphy who both looked lively. Ferrier came within a whisker of halving the deficit with a solo run and shot that grazed the outside of the post.

Dale’s dominance paid off when they extended their lead and what a tremendous goal it was. A flowing move that had over 20 passes moved the ball from back to front and from right to left with Tranmere players chasing shadows. Ian Henderson’s final pass found Norrington-Davies and the on loan Sheffield United man was cool inside the box, dropping his shoulder before using the outside of his left boot to slot in his first ever senior goal.

Dale were cruising and at one point late on showed 73% possession on the stats board but a bizarre moment in the final minute set the cat amongst the pigeons. With the ball at his feet, Stephen Dooley looked set to pass the ball back to Robert Sanchez who had positioned himself outside of his goal mouth but somehow, under pressure from Ferrier, the Irishman put the ball into his own net.

This gave hope to the 7,000 home fans and they rallied their troops for another assault, something one player took literally. A corner ball wasn’t cleared by the Rochdale defence and when Connor Jennings fired a deflected shot from close range into the net, the Tranmere players wanted to get the game underway quickly but MJ Williams had other ideas. As the players tussled for the ball inside the goal; Hepburn-Murphy grabbed Williams around the neck and hauled him to the floor. There followed a huge melee with the Tranmere man seeing red whilst Williams and Ferrier were booked for their involvement.

That ended the game as a contest really and Rochdale held on for the points. It was almost a perfect performance from Barry-Murphy’s side but for the last few minutes with lots of positives to take from today.