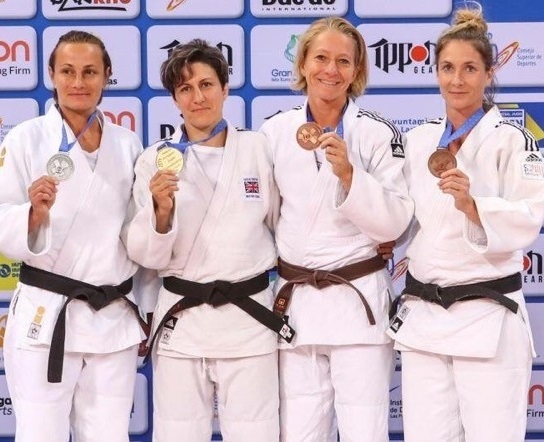 Alexandra Sarret from France was caught off guard with osoto gari (major leg sweep) earning a wazari score, then held down for ippon (full point) win.

Nadine Roessler from Germany battled hard, but Sophie’s drive and power saw her being floored with a beautifully timed sumi gaeshi (sacrifice throw) for another ippon win.

Sophie Cox said: “I was really pleased with the intensity of my performance in these fights, as this was my first competition of the year.

“Since becoming lead coach for England Judo Development in February I have been fully occupied with coaching and overseeing numerous trips to elite European competitions for youngsters.”

In the final Sophie’s opponent was Iuliia Kotova from Russia. Kotova had swept to easy ippon victories in her two previous fights and posed a real threat to Sophie’s title winning ambitions.

Sophie said: “Although I eventually won the contest, I was frustrated by the way the bout progressed.

“The first minute and a half were tough and a real struggle. I felt more in control as the fight progressed but the Russian continually slowed down the action.

“By the end of normal time we had both received two penalties for slow play, so with scores even it was on to Golden Score.

“After another minute and a half, the Russian girl gave up and another penalty against her led to disqualification and gave me the Gold Medal.

“I felt it was a just reward for my willingness to press forward at every opportunity.”

“So, a great result for me personally and a fitting reward for ex GB international and former GB Army Judo Coach Sami Smithson who had been in the coach’s chair inspiring me all day.

“In the team event the following day, I continued my good form with two ippon victories, helping my Team GB to a bronze medal.”

“It was a tough, high standard, enjoyable event.

“Personally, I’d like to see more effort made to make the days more family friendly.

“Over 800 competitors from 35 countries took part.

“However, there is still a disparity in participation between male and female judoka. I was there with my two children, and a children’s camp, demonstrations, and creche facilities would appeal to the growing number of families who are keen to keep on competing.

“I am now busy with final preparations for my third MMA female only fighters camp next weekend to be held at Kendal Judo Club. I am really proud that the camp now attracts over 50 fighters, inclusive of all abilities, with an impressive line-up of experienced, internationally renowned coaches.”