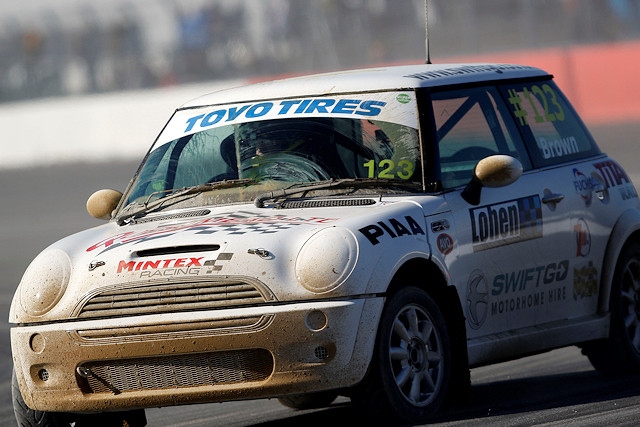 Despite being in only his first full year competing in the Toyo Tyres British Rallycross Championship, Steve Brown has already bagged a podium in the BMW MINI Championship and will head to Bank Holiday Monday’s (26 August) round at Lydden Hill with his sights sets on a repeat performance during round five of the series.

Brown, 32, from Rochdale, has made the switch from his Nissan Micra Kit Car in the FIRC Belgian Rally Championship to British Rallycross this season after getting a taster for the sport as a guest of the Bellerby RX Motorsport outfit last year. His outing in the BTRDA Rallycross series offered and opportunity to mount a full assault on the British Championship this season and Brown has been adapting to the BMW MINI single make formula throughout 2019.

Brown has shown impressive form throughout the opening four rounds of the season, and as the championship heads into the second half of the year, he sits in fifth place in the ultra-competitive series and just two points behind fourth spot.

Although an eight-week break will mean it may take a while to adapt, he is looking forward to getting back behind the wheel at a familiar circuit.

“This will be the first time this season that we return to a circuit that I’ve actually competed on before which will certainly help in the qualifying races,” said Brown.

“Lydden formed round two of the championship and I’ve found that it takes me a while to learn the circuits, get the lines right and find the optimum braking points. Most of the other contenders have experience of the circuits on the tour so I'm constantly playing catch up. Hopefully this will be a good leveller and I'm looking forward to this one.”

Although technical glitches on the opener at Silverstone hampered progress, Brown secured fifth at Lydden earlier this year, followed by a maiden podium at Pembrey last time out. He was eager to adapt his driving style in South Wales after getting shunted down the order but is eager to find a happy medium back at Lydden.

Brown said: “I was losing a lot of places over the opening rounds as I wasn’t aggressive enough with my driving. I was simply getting punted down the order; I’m not used to that.”

“Normally it’s just me and the co-driver so to have 10 other drivers all wanting the same inch of road takes getting used to. I`ll have a slightly different approach from Pembrey but I`ll certainly be doing what I can to get another podium this weekend.”