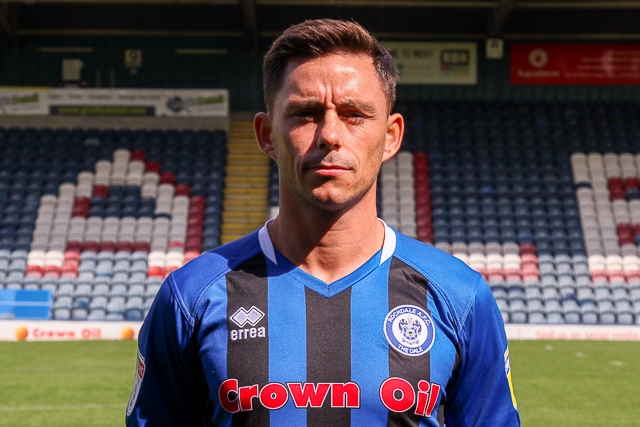 Ian Henderson netted his 100th league goal for Rochdale when he opened the scoring in a comfortable 3-0 win Roots Hall against winless Southend.

The Dale skipper finished off from close range a lovely move in the 35th minute and Aaron Morley’s emphatic shot less than two minutes later doubled Rochdale's advantage. Callum Camps sealed the win midway through the second half with a crisp finish from inside the box again after good build up play. Late substitute Matty Done was left frustrated by two wonderful stops from Southend keeper Mark Oxley as Dale heaped more pressure on Shrimpers boss Kevin Bond.

After the midweek victory over Carlisle United set up a trip to Old Trafford to take on Manchester United, morale was sky high heading into this league game against a Southend side that had lost all of their opening games in Sky Bet League one this season.

Having rested some of the more senior players for the midweek cup game, Brian Barry-Murphy made five changes as they looked for their second away win of the season.

The opening half hour of the game provided little in the way of goal mouth action with the first real chance falling Dale’s way in the 35th minute. Rochdale’s style of play this season is very easy on the eye as they build from the back and the opening goal saw Dale carve open Southend with some sharp passing and excellent movement.

Right back Jimmy Keohane played into the centre of the pitch to Aaron Morley who played a first time pass to Rekeil Pyke. The on loan Huddersfield winger's neat flick found Stephen Dooley and with Keohane continuing his run forward, the two Irishmen linked up for Keohane to send a low pass across the face of goal for Henderson to tap in his milestone goal.

Just over 60 seconds later, Dale doubled their lead with another sumptuous goal. Norrington-Davies made headway down the left before finding Henderson. The captain’s clever reverse pass found Dooley just inside the area who in turn picked out Norrington-Davies. The Sheffield United loanee slid the ball to Camps on the edge of the box and his nonchalant little touch with the outside of his boot fed Morley whose side footed shot whistled into the roof of the net giving Mark Oxley in the Southend goal no chance at all.

Southend improved slightly after the break and went close on a couple of occasions but not before Camps warmed the hands of Oxley from another Norrington-Davies' centre.

The brilliantly named Brandon Goodship brought a fine low save from Robert Sanchez. The Spaniard had to be alert to get down low to is right to touch Goodship’s low shot around the post. Moments later Goodship got the better of Jimmy Keohane to wriggle into the box; his curling effort narrowly missing the right hand post.

Despite those two scares, Dale were in control with Camps even trying an audacious 50 yard shot; Oxley not troubled too much as he back peddled to gather comfortably.

Rochdale’s third came with 13 minutes left and once again their passing and movement was too much for the home side. MJ Williams’ lofted ball down the left found Norrington-Davies in plenty of space with the full back driving into the area and pulling a pass back to the onrushing Camps to steer the ball into the bottom left hand corner to send the 229 travelling Dale fans, some of whom only arrived at half-time due to traffic issues, into celebration.

The visitors could have added to their tally but Southend somehow repelled anything else Dale threw at them. Oxley was quickly out to deny Dooley when he was played in by Camps whilst substitutes Ollie Rathbone and Matty Done would also miss out. Rathbone powered a header from a corner just the wrong side of the upright whilst Done’s right footed shot was destined for the bottom corner until Oxley pulled off a superb one handed save.

Oxley would again foil Done in stoppage time, when central defender Eoghan O’Connell found himself in an unusual position on the right of the Southend box, the former Bury man hit a volley into the ground that inadvertently fell to Done at the back post. The striker’s shot back across goal was somehow kept out by Oxley on the line.

It was a fantastic team performance from Barry-Murphy’s men who celebrated with the Dale fans after the game and with two games now postponed due to the international break, it will give the Dale players a chance to re-charge their batteries with a few days off.