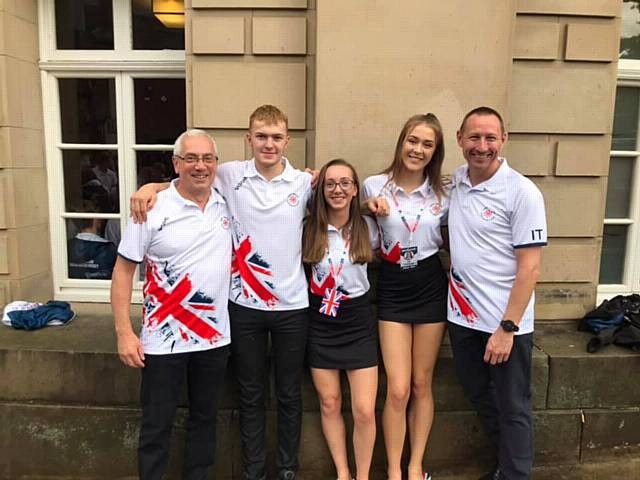 Three players of Rochdale Underwater Hockey Club have been doing their bit to get glory for Great Britain in the sport of underwater hockey, with one team bringing home a silver medal.

Ella Tomlinson, 15, Tiegan Alexander, 18, and Isaac Rhodes-Dawson, 17, got into the pool to take part in the 5th Group World Championships at Sheffield, which attracted teams from 13 nations and was the first World Age Groups for all the Rochdale players.

Isaac played for the GB under 19 men’s team which played against the teams from New Zealand, Columbia, France, South Africa, Argentina, Portugal and Canada.

The men’s team won a silver medal after losing to New Zealand 8-2 with Isaac contributing one of the GB goals. It was an amazing finals performance as NZ previously beat them 10-0 in the round robins.

Ella and Tiegan were part of the GB under 19 women’s team which played against New Zealand, Columbia, France and South Africa. Other members of the GB teams came from as far afield as Orkney Islands and Plymouth.

The women’s team got as far as the bronze playoffs, just missing out on a medal after a hard-fought game against France. The final score was Great Britain 4 – France 6, with Ella scoring the last goal for Great Britain.

The tournament schedule allowed little time for rest as each team played twice a day between August 16 and 24, with some of the 207 matches starting as early as 8am.

Isaac has been playing for eight years, recently competing for Manchester A at the highest-level competitions.

Rochdale club coach Mick Hyde was also appointed assistant coach for the GB under 19 men’s team. Club coach Ian Tait was also involved in the organisation, management and support for the event.

Coach Mick has been playing and coaching at Rochdale Underwater Hockey club for the last 38 years, helping to develop young players from their initial start at the club, through to national and international standard players.

Underwater hockey – also known as Octopush - is a team-based sport, played with a plastic-coated lead puck on the bottom of the swimming pool. The aim is to get the puck into the opponent's goal as players battle it out whilst holding their breath.

The puck is moved using small bats approximately 30cms long, players wear a mask, snorkel and a pair of fins and are required to hold their breath while underwater and playing the puck. It is a team sport requiring teamwork, fitness and individual skills, and one of the only sports to be played in three dimensions.

Rochdale has club sessions for beginners, aged 8 and over, every Thursday from 7.30pm at Oulder Hill Leisure Centre. Ring 01706 373967 to book a four-week trial.