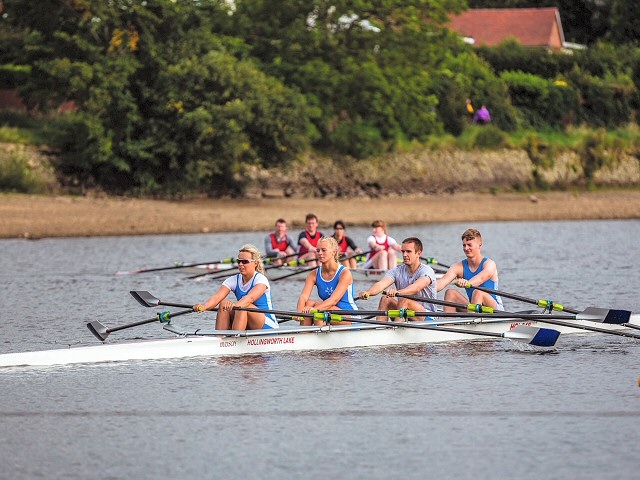 The North of England Sprint Regatta took place at Hollingworth Lake on Saturday 31 August with nearly 400 crews racing in 200 races.

The event was the biggest regatta Hollingworth Lake Rowing Club has hosted in recent history, and races were held between 8.30am and 7.30pm.

Rowers from 30 clubs across the country, aged 11 to 81, took to the water in what was described as ‘challenging conditions’, hoping to bag the prize money of up to £500 each.

Running alongside the regatta were the Explore races. Explore rowing is aimed at recreational rowers, novices, recent graduates of learn to row courses and those returning to rowing after a break.

Elaine Huskinson, Regatta Secretary, said: “We introduced the event last year at the request of one of our members John Shaw.

“Unfortunately, we lost John to illness this year, but the Explore Rowing and the Sunday League races were something he was very passionate about.

“We wanted to keep the events in to allow those who usually compete in the Sunday League the opportunity to experience regatta racing in the more stable Explore boats.”

The Explore races saw Warrington crews win both the A and B finals and the £500 junior prize also went to Warrington. The senior prize was won by Bradford ARC.

Elaine said of the event: “This was my first year as secretary and my primary aim was to have a safe, well run regatta which showed visiting clubs that Hollingworth Lake wasn’t the bleakest place to row (this according to Sir Steve Redgrave when he came to the lake).

“We had all seasons in one day and challenges to overcome with the lake level being reduced by United Utilities to carry out maintenance works as we prepared the course.

“Nevertheless, members worked together to put on what I hope was a successful day.

“It’s thanks to our members, over 20 volunteer umpires from across the North West, the Water Activity Centre and Sailing Club that we were able to put on the regatta and welcome rowers from as far as Glasgow and Oxford.”