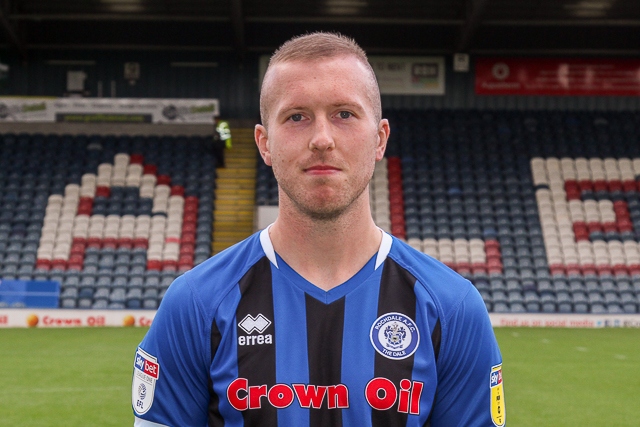 Lincoln snatched a late equaliser to stop Rochdale earning a first home win in the league this season on Tuesday (17 September).

After the heavy defeat at Peterborough on Saturday, Brian Barry-Murphy made just one change to his starting line-up with Ollie Rathbone preferred in midfield to Aaron Morley who dropped to the bench.

Rochdale bossed the first half and had plenty of early opportunities but couldn’t make the breakthrough. As early as the second minute, Dooley saw his shot well-blocked with his follow-up going narrowly wide whilst Rathbone’s driving run and shot flashed just wide.

Dale edged in front in the 13th minute when Dooley netted his first of the season. Some intricate play from Barry-Murphy’s side saw Camps and Henderson exchange passes with Camps turning a shot at goal that was only parried by Josh Vickers in the Lincoln goal. Dooley reacted quickest to fire a deflected shot into the net from 8 yards out.

Rochdale continued to create chances without causing Vickers too many problems. Rekeil Pyke’s angled drive hit the side netting whilst Dooley tried his luck again after good work from Eoghan O’Connell; the Irishman hitting straight at Vickers.

As the half time whistle beckoned, Camps’ instinctive shot through the legs of Jason Shackell was well saved by Vickers.

The game was a proverbial game of two halves with Dale being in control of the first, Lincoln coming out much the better team in the second.

Full back Toffolo sent a dangerous ball across the face of the goal seven minutes after the re-start and despite the best efforts of two Lincoln players; neither could connect as they slid in.

Dale keeper Robert Sanchez pulled off a super one handed save from a dipping Jack Payne shot whilst the Spaniard was brave as he came out to deny Payne once again eight minutes later.

The leveller came with the clock ticking down as the Imps threw everything at their hosts. The dangerous Harry Toffolo whipped in a cross from the left with Nottingham Forest loanee Tyler Walker glancing the ball in at the near post.

Having led for so long, it certainly felt like two points dropped at the full time whistle but after the heavy defeat at the weekend, a point will be a welcomed one in the grand scheme of things.