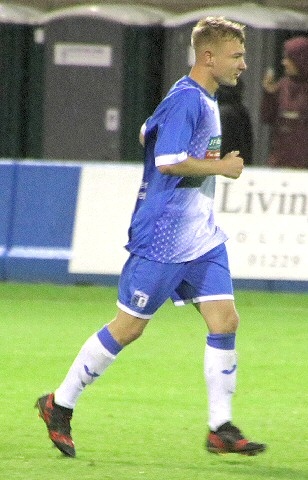 A home fixture for Barrow at the Progression Solicitors Stadium, the game was the opening round of the 2019/20 Lancashire Senior Cup.

Barrow AFC, or the Bluebirds as they are fondly known, train at Hopwood Hall College Sports Arena in Middleton, where some of their talented students can often be found training with the senior Barrow squad.

One such player is defender Kyle, who explained: "I joined Hopwood Hall College doing an electrical installation course and started playing for the college’s football academy too. It was mentioned that they were looking for people to train with Barrow and I was lucky enough to get to try out."

Kyle trained regularly with the Bluebirds throughout their pre-season campaign, as well as featuring in their 3-3 friendly draw against Lancaster City at the Giant Axe back in July.

He admits that playing with a professional outfit is a bit different from playing with his Hopwood Hall teammates, but that doesn't mean it isn't enjoyable.

"It's been good, I've really enjoyed it”, he added.

“The boys have helped me out a lot and they have helped me understand things to help me progress as a player. It's a lot more intense and their standard is much quicker. Some of them take it easy on me but not all of them!

“Playing for the first team was a great experience. It was probably the most people I've ever played in front of."

Like at Lancaster, the Barrow home game finished 3-3 with a penalty shootout needed to determine the result. An epic shootout followed, with Kyle confidently slotting his penalty away as the Bluebirds secured their place in the next round with a 12-11 win on penalties.

As part of the college’s close relationship with Barrow AFC, Kyle has been afforded a priceless experience at the heart of a full-time professional football club. His answer, when asked if he thinks he will get another chance to pull on the Bluebirds shirt: "I hope so!"