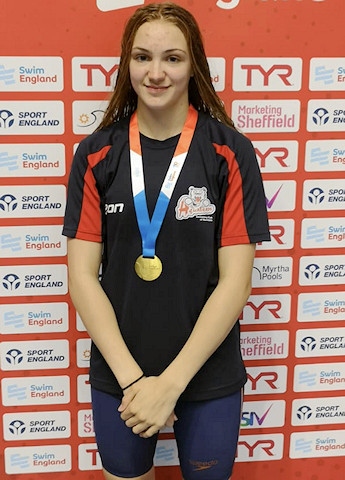 Less than half a second separated the top three in the race, with Lucy clocking 2:24.14 for gold, with the bronze medallist just 0.42s behind her.

Her coach, Ryan Manchester, said: “I have enjoyed working with Lucy; she is a hard worker and has a lot of potential going forward."

Lucy also qualified for the 50m, 100m, and 200m breaststroke finals in the British Summer Championships at the end of July. Her strongest finish was fourth in the 200m breaststroke with a fabulous personal best.

The 15-year-old has an interesting year ahead with sitting her GCSE's and swimming, but she remains committed to the sport.

Lucy began swimming at the age of 12, after seeing how much her younger brother enjoyed competing and has gone on to shine in the sport, winning medals in various championships including the ASA North Regional Championships.

The next ranked swimmers at Swim England affiliated clubs – or those who have chosen to be ranked as an English swimmer – are invited to compete at the Nationals.