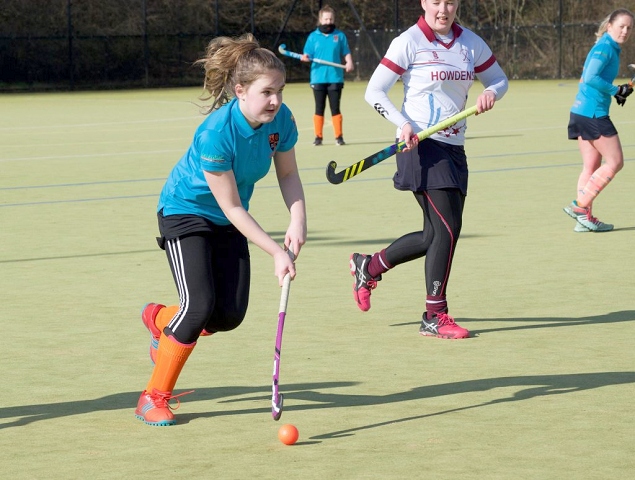 Rochdale had to make a few changes to their starting line-up due to some players having other commitments and this led to a change in formation for the ladies.

From the first whistle these changes did not seem to affect Rochdale and within five minutes they found themselves taking the lead. Some excellent passing by Jennie Ransome, Paula McDonald and Gemma Hodcroft resulted in Jenny Banks latching onto a through ball from Hodcroft. Banks was one on one with the keeper and with no hesitation, smashed the ball into the back of the net.

Rochdale’s wingers Roisin Pickering, Rebecca Newton and Maddie Beaumont were finding themselves in acres of space on their wings. They worked tirelessly up and down crossing the ball into the D area but the Didsbury defence were keeping a cool head and intercepting the ball when needed.

Didsbury did find themselves attacking Rochdale’s D area a few times in the first half, but as usual Rochdale’s defence of Gill Knowles, Kate Brammer and Dionne Collinson proved too much.

When attacking, the Rochdale players were gaining more and more confidence, forwards Katie Burrell and Banks had a number of shots at goal.

Just before the break Hodcroft worked the ball into the D area and Banks took a shot. The keeper saved, but Banks’s reactions were like lightening and she pounced on the loose ball and pushed it over the line.

The second half started slowly but Rochdale’s tenacity paid off when they started to take full control of the game. Ransome and McDonald were proving too strong in the middle of the pitch with their surging runs towards the Didsbury area. Ransome broke through on the right wing, leaving the Didsbury defenders for dust, she crossed the ball and found Burrell unmarked at the back post. Burrell very calmly swept the ball into the back of the net.

After this the goals kept coming. Rochdale were now showing off their excellent passing and teamwork. Collinson, Brammer and Knowles were happy to get in on the act, leaving goalkeeper Sam Partington with nothing to do but sweat due to the heat of the day!

Passes from defence to attack kept coming and coming and Burrell found herself on the score sheet again with a near exact replica goal to her first, but this time Pickering crossed the ball from the wing.

Didsbury were now finding themselves open at the back as they were trying their best to get on the scoresheet, they started to push more and more players up the pitch which proved to be a mistake.

Collinson intercepted the ball in defence and cleverly passed it to Banks. Banks expertly turned her defender and found herself once again through on goal. She took on the onrushing goalkeeper but unbeknown to her Banks had already struck the ball through her legs and scored her hat-trick.

The Didsbury defence were showing signs of fatigue and with several short corners awarded to Rochdale they could smell another goal. McDonald injected the ball into the area and Hodcroft stopped it and took a strike at goal. The ball passed four defenders and went in.

Finally, Hodcroft had got the goal she deserved.

The final ten minutes of the game saw Rochdale still working hard, Ransome continued to work her socks off in the middle of the pitch making some excellent linking runs with Pickering.

Banks finished the game with a fourth goal after picking up a loose ball in the D area, her quick reactions saw her take a strike at goal which sneaked in by the side of the keeper.

Captain Roisin Pickering said: “To win 7-0 on the first day of the season is a great result. I’m proud of every one of the players today. We all worked hard, and the result reflects this.

“On that display I am excited for the season ahead.”