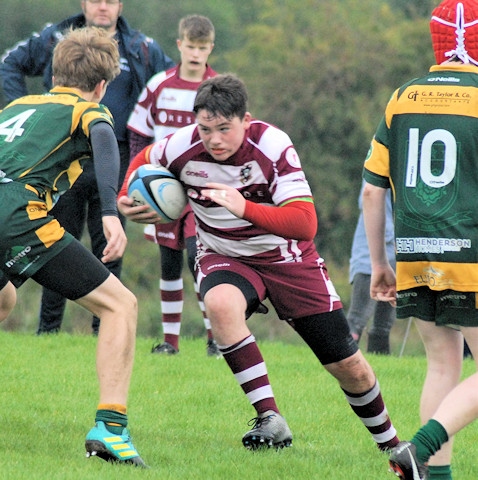 Garrett Myers on the charge

Rochdale U15s had a home draw against West Park St. Helens U15s in the first weekend of the Junior Rugby Cup matches.

West Park were a formidable looking team, with big players all over the field, so Rochdale would have to be on top of their game to get anything from the match.

It was a rather damp and dank day with constant drizzle and this limited how expansive both teams wanted to be. Park’s philosophy was to move the ball wide at every opportunity and use their large centre pairing running off shoulders to get over the gain line. Rochdale were content to keep things tight and play the conditions using their big forwards, Garrett Myers, James O’Connell, Kai Potter and Nick Wright, to run hard and straight. Defences were on top and the first quarter remained scoreless.

Rochdale’s direct approach finally paid off as they were awarded a kickable penalty in the opposition 22 which was duly converted. Rochdale were soon back on the attack and after Ben Sunderland turned over the ball followed by some quick attacking ruck ball, West Park were drawn offside. Mitch Holt spotted the opportunity and a quick-tap saw him scoot through a gap and over the line for a converted try.

West Park’s attacking options have a rugby league feel to them with dummy runners and balls out the back along with short passes off the inside centre to a strike runner. From one such move the outside centre hit a great line to cut through the Rochdale defence and make the whitewash. The try was converted and the half looked to be petering out when the West Park right wing deliberately threw the ball into touch assuming this would end the half. This is a penalty offence and Rochdale took full advantage. Taking a tap penalty 5 metres out the ball was swiftly transferred to the left wing where O’Connell received the scoring pass and touched down close to the sticks for a converted try.

Half time the score was Rochdale 17 - 7 West Park.

Rochdale were playing down the slope in the second half and used the conditions to their advantage, pinning West Park in their 22 for long periods. West Park did have some incursions into the Rochdale half but these were few and far between. After some sustained pressure Rochdale crossed the line again but the ball was dropped in contact and the opportunity was lost. Rochdale forced a scrum after good work holding up the attacker close to the Park line, Wright picked up from No. 8 and crashed over to put the tie beyond West Park and the match finished 24 - 7.

There was some excellent attack and defence from James Tasker and Will Simmons in the Rochdale centre and Paddy Kershaw hit lots of tackles and rucks. MOTM went to Ben Sunderland for great work at the breakdown resulting in turnovers and forced errors. A mention to Oli Simpson who was stretchered off after a heavy collision, he got the all clear from hospital and just needs some rest. Speedy recovery Oli.

All in all, Rochdale gave an excellent collective performance against a good team. Rochdale face Southport away next week in another cup game and their opponents will be looking for a win after a suffering a heavy defeat to Manchester in the first round.