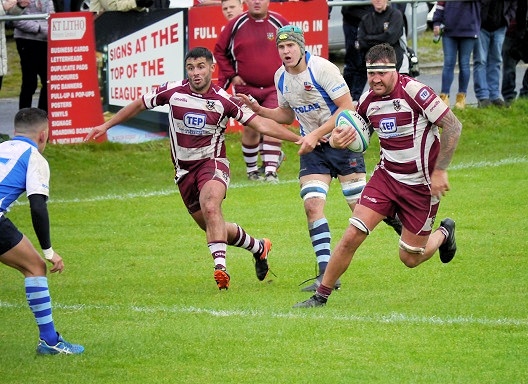 The conditions were very poor for the visit of Southport to Rochdale on Saturday 28 September.

There had been near consistent rain all morning that almost washed out the pre-match Mini festival. As it was, the 1st XV had to switch its game from the waterlogged main pitch.

Six minutes into the match and Rochdale scored a forceful pushover try out left of the posts, engineered from a lineout which functioned on and off throughout the match. Such was the tempo of the effort, the ‘Dale supporters started to imagine many more of these attacks to come. Andrew Donoghue crashed over to score and stand in kicker Nick Ahearn placed the conversion well to make it 7-0 early on.

“Up your jumper rugby” featured widely and the stronger Rochdale forwards made good ground only to be thwarted by a couple of dropped balls, which the conditions contributed to. Aidy Gleeson made several telling runs out of defence as did Dom Macklin. Support was on hand but Southport managed time and again to spoil the Rochdale attacks. Dale had use of a reasonable wind at their backs but never manged to make telling kicks to secure territory. Shaun Needham along with Tom Helliwell provided continuous support, Hindle and Wadsworth both tackled well as the Southport forwards tried but failed to get into the Dale 22.

Southport were no mugs, they harried and sniped at the home side and struggled through to halftime keeping the Dale pack at bay. Rochdale were at fault with some repeat offending that the referee penalised often.

Just after halftime Southport were awarded a penalty after a dubious offside decision but their attempt on goal failed and the midfield stalemate resumed. The home side then had a similar penalty but Ahearn made no mistake and Dale were 10-0 up.

Coach Collins made some changes, partly through injury to team captain Dom Serridge. Rochdale were missing some regulars but Travis Townsend had returned from cricket duty and after starting at fullback he was moved to scrum half and Ahearn went into defence. Josh Boardman and Jack Kelly acquitted themselves well and the strength in depth helped Rochdale to gain superiority over the visitors.

Southport’s only score of the match came courtesy of a penalty for offside and at 10-3 Rochdale stepped up their efforts. Some fresh legs helped in the conditions and after 30 mins of the half, Ross Hartley was on hand to score after a 20 metre rolling maul, Ahearn again on hand to convert. 17-3.

Rochdale's front row deserve credit as they never took a step backwards and applied constant pressure on their opposite numbers to compound the visitor's woes and time and again the turmoil of the pack turned into possession. The result wasn’t in doubt, Andrew Donoghue took the ball from Helliwell after good support play and steady pressure and with only three minutes left he crashed over out wide.

22-3 was a fair result, Rochdale had the upper hand in possession and territory but the conditions did not help either side. The home side had good replacements that were used well and at the right time, Collins' nowse did the trick and he deserves his four wins from four games. There is much more to come though and no complacency must be tolerated. Next week Rochdale are on the road to Tartleton.