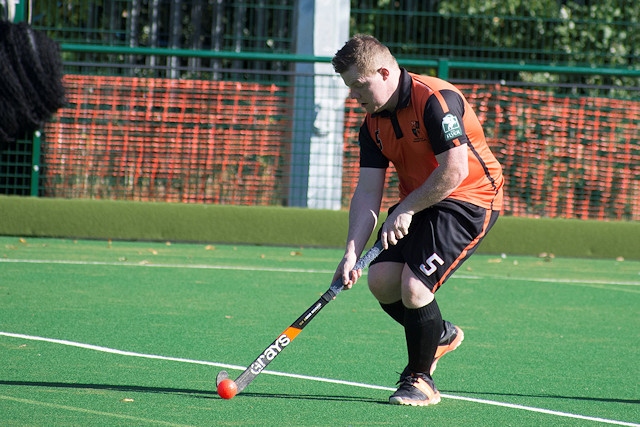 Sean Carney was named man of the match

Saturday (28 September) saw Rochdale men’s seconds take on Preston men’s fives, with much the same spirit as the previous week's defeat, but this time, it all clicked for Rochdale under coach Aasim Chaudhry's guidance to earn a thumping 8-2 victory.

Geed up by the home support and a fiery speech from captain Tim Liptrot, Rochdale started in earnest and soon had a 2-0 lead. This was largely due to a refreshed front five of Bjorne Brauns, Manny Ahmed, Dean Close, Adam Massey, and, leading with a controlled passion, Sean Carney, which ultimately saw him bag three goals and The Flying Horse man of the match award.

It was not entirely one-sided however, as a defensive mix up led to a Preston penalty corner which was struck in the bottom corner with well-oiled precision. A clever goal from Brauns restored the two goal advantage but another Preston penalty corner brought them back in contention with a drag flick not out of place at county level.

Rochdale dug deep however and went in at half time 4-2 up with a smart reverse stick finish from Close.

Determined to do even better in the second half, Rochdale switched styles and played from deeper with some brilliant free flowing moves. This was exemplified by last season's most improved player, Liam Nutter, showing his ambition had not lowered with a 1-2 around the Preston top-D.

This led to a first-time reverse stick strike, which – had it gone a little lower – would have ended the gaol of the season competition just two weeks into the season.

Additional goals from Close, Brauns and Massey finished Preston off, but it was not as easy as the score line suggested, with Preston showing some promising stuff and some youngsters who will most likely reach a higher level.

However, the day was deservedly Rochdale's and was a good performance from everyone.

The Flying Horse man of the match was Sean Carney.