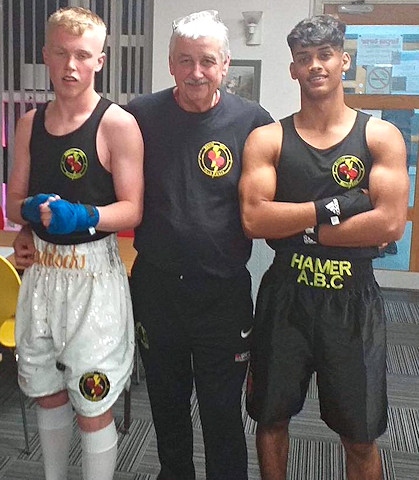 First on was Aeron ‘The Viking’ Maddocks, who stormed out of the blue corner on the sound of the bell, throwing swift one-two combinations to the head. Murrel replied with the same combination, which initially forced the Hamer lad to step back onto the ropes.

His opponent came rushing towards him with wild swings which Maddocks managed to avoid.

When the Yorkshire boxer's punches missed, they left him open to a jolting left and right to the face, followed by a scintillating left hook to the right side of the head from Maddocks.

As the round progressed, both boxers connected with punishing blows, which gained the crowd’s attention and the noise levels reach fever pitch.

In the second round, the Hamer boxer began to wait in the centre of the ring for his opponent to unload his punches, so that he could counter-punch with his jab and combinations punches after he had made Murrel miss.

It was a clever tactic which was gaining him the advantage and midway through the round Maddocks caught his Yorkshire opponent with a solid right hand to the chin, which momentarily stopped Murrel in his tracks.

Just before the bell to end the round, Maddocks forced Murrel back onto the ropes to unload hooks and uppercuts to both the body and head.

Coming into the third and last round, Murrel had clearly been told by his corner to take the action to his opponent, when the crowd witnessed a spirited attack from the Yorkshire boxer as he landed close-up punches to both the body and head of the Hamer lad.

Maddocks stood his ground and replied with solid returns and the crowd let out a roar of approval as both boxers stood toe-to-toe in the middle of the ring, trading heavy blows upon each other to end the contest, which went to the Hamer lad by split-decision.

Next on was the Hamer novice boxer ‘Fabulous’ Faisal Khan, who showed his inexperience when matched against local boxer Tyreese Manyou of St Peter’s ABC.

Faisal struggled to contain his anxiety when Manyou attacked him with swinging punches as the noise from the crowd vibrated around the room.

Both boxers showed inexperience and tension as they swung misguided punches at each other, but as the volume from the crowd grew louder, it seemed to inspire Manyou to finish their exchange of punches with a telling blow, which in turn helped the judges to vote in his favour to take the closely-fought match.