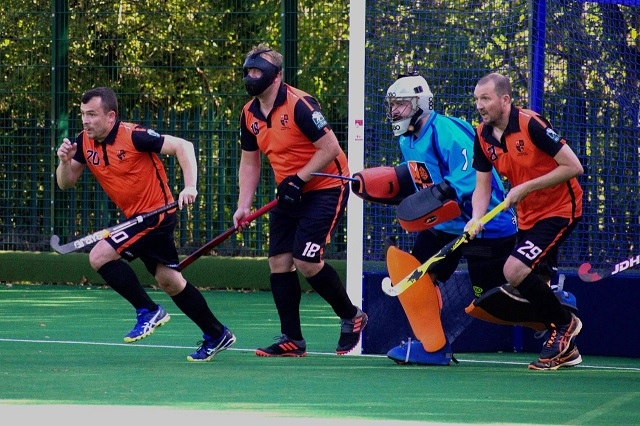 Rochdale Men's Seconds were trying to make it three wins in a row at Fylde on Saturday 5 October, and with Fylde only fielding nine players to begin with, Rochdale were already visualising how many goals they would get at an easy day at the office.

But, as the opening ten minutes showed, this was not going to be the case, as a defiant Fylde made clever use of their lack of numbers by dominating the midfield with superior movement and fitness. There was the occasional good attack at either end, but when Fylde's full complement arrived, they looked like taking the lead.

However strong encouragement from captain, Tim Liptrot, and full back, Mark Vynne, combined with the magic of Dave Marlow to kept them out.

A breakaway goal came to Rochdale after Fylde overcommitted in the midfield, allowing Graham Broadley to hit a quick ball to Sean Carney who played a silky one-two with Liam Nutter before dispatching the ball reverse stick into the goal from the top of the D.

The start of the second half was largely Rochdale attacking with Fylde content to sit back. Proving a difficult side to break down, Carney took things into his own hands, and scored past two defenders and a goalkeeper from the edge, where the D reaches the base line, as nobody in their right mind would even try it.

Fylde now needing a response started to attack with revitalised effort, were it not for some fine defending and some superb saves from Jimmy Deacy in the Rochdale goal.

Captain Tim Liptrot said: "Today wasn't our best performance but we ground out a result. However, fair play to Fylde they were a good, well organized side and I will be surprised if they don't start getting some points soon."

The Flying Horse Man of the match was Sean Carney.