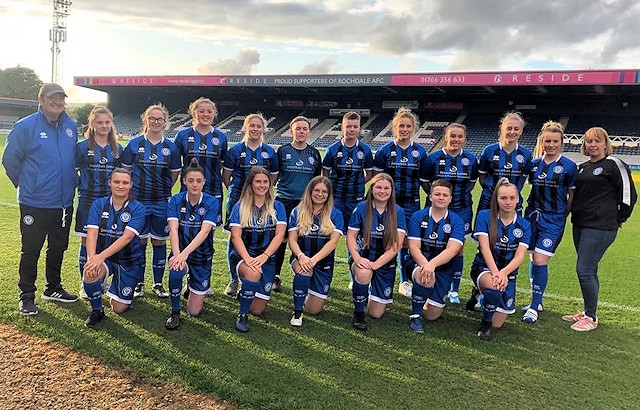 Rochdale AFC Ladies have moved to the top the Great Manchester Women's League Division One table after a 4-2 victory over West Didsbury and Chorlton Women FC.

Despite an even balance throughout the first half, Dale grew stronger in an effort to edge out their opponents. A lofted cross into the area from Nicola Delaney was cleared to Emily Hindle, lurking outside the box.

After controlling the ball on her chest, Hindle hit a spectacular volley into the roof of the net - from 25 yards - to give Dale the lead heading into the break.

The home side came out of the traps quickly in the second half, in pursuit of a further advantage. Efforts against the crossbar and post however denied them in quick succession.

Abi Driffield was laid the eventual claim to the second goal. A move from the midfield saw the ball break out wide to Driffield on the right, who confidently chipped the keeper to double the lead.

The visitors didn’t go down without a fight. Two long balls over the Dale defence caught them out twice in a ten-minute spell. Both chances were put away, levelling the contest at 2-2.

The pendulum swung once more in favour of Dale. A whipped free kick from Emma Flynn found the head of Erin Kilpatrick, who headed home to put Rochdale ahead.

A period of dominating possession paved way to the final clincher. The ball worked over to Lucy Pilling who hit a sweet strike into the bottom corner, scoring her third goal in as many games and wrapped up the encounter 4-2.

Rochdale AFC Ladies next travel to Langho Ladies FC in the Division One League Cup on Sunday 13 October.