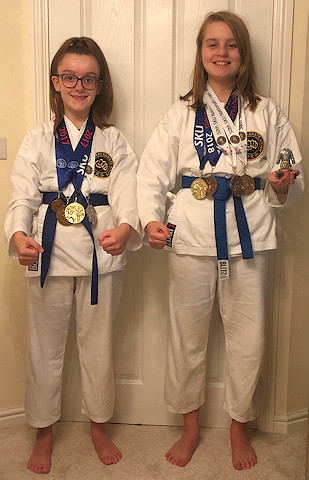 Sisters are proving themselves a force to be reckoned with as they have already achieved their Karate blue belts after just two years in the sport.

Madeleine, 13, said: “I first tried karate in Year 7 at Whitworth in an after-school club. My dad Gavin used to do karate and is a black belt and he suggested I join a club.”

Although in Year 6 at the time, Eleanor, now 12, was allowed to join her sister in the high school club, and she also joined her at Rochdale Warriors.

They have both just made the grade and achieved their sixth belt, blue, and are now working towards their purple.

Madeleine said: “I am now in the seniors so I will be marked out of 100 when I go for my next grading. To be graded, you have to have had 40 hours of lessons but attending the school club counts towards that total.

“I have entered the nationals twice as a junior. In 2018 I got bronze in the kata, and this year I got bronze and Eleanor got silver in the kata. We also competed as a pair and were fourth.

“Learning karate has taught me resilience, because you have to work hard, and it has taught me self defence. I feel confident that I am able to defend myself.

“Karate is fun and good exercise and you are always learning something new. I have also met a lot of really nice people; although, because of my height, I am often fighting the adults at the club.

“You may think it is only a belt, but when you achieve it you realise how important it is and it shows how far you have come.

“I remember being a white belt and sitting on the mat watching the experienced people doing karate; now I am the one they are watching.”