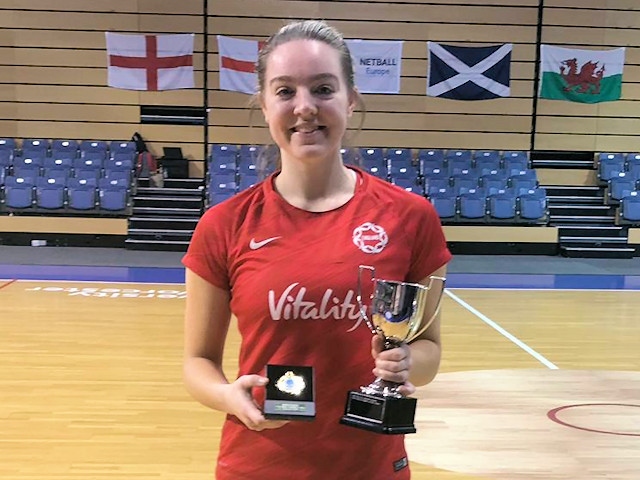 A local young netball player has recently guided her England team to victory at the final of this year’s Netball Europe tournament.

Selected as captain of the England U21 squad in September, Hannah Williams, from Milnrow, and her squad won gold at this year’s U21 Championships, beating Scotland in the final fixture in Worcester on 6 October.

Speaking of England’s victory, Hannah said: “For some of the girls it was their first time playing for England or their first U21 cap, and so because I had that bit more experience I think I was really able to apply my experience and knowledge into helping them feel comfortable and confident to perform at their very best during the competition.

“The whole tournament was incredible, and the girls were incredible, putting out some amazing displays of netball. It was a great opportunity to see how well we had gelled as a very new squad with very limited time to train and work with each other and the coaches before the competition.

“The girls really worked hard to put out onto the court what the coaches were asking of them and also what they expected from each other.”

This win was an especially great achievement for Hannah after she ruptured her ACL during a game in April 2018, at the closing weekend of the NPL league, and has been working hard to get back on court ever since.

She added: “Of course, knowing the extent of the injury and the impact it was going to have was extremely tough. After having scans and meetings with the surgeon, I wanted to know when I'd be back to netball and what work I'd have to put in to get there straight away.

“Being told 9 months (a whole season) until I would be able to even think about playing again was extremely hard, but I was so determined to get back to doing what I loved that I didn't really consider not being able to play again.”

The 19-year-old from Milnrow started her netball journey at Milnrow Parish Primary School, where she would play netball during school hours.

At the age of 10, Hannah joined a local Sunday league before joining Rochdale Netball Club at age 11 and Tameside Netball Club at 12. From there, she progressed through from U13s all the way to U16s and then to seniors, who she still currently plays for alongside captaining England U21’s squad.

Currently in her second year at university studying psychology at Nottingham Trent, Hannah is still keen to fulfil netball alongside her studies.