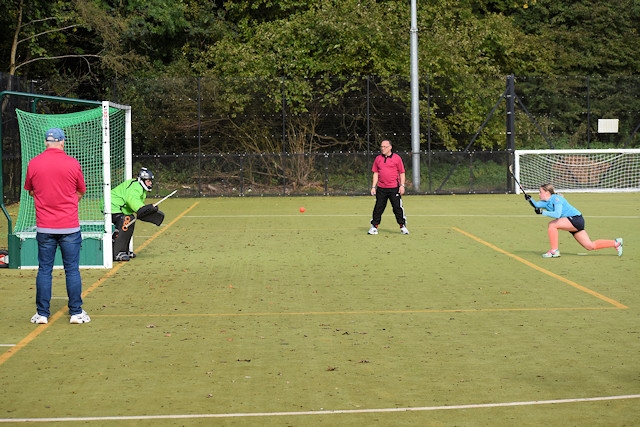 After a strong start to the season Rochdale were looking to make further gains in their game with Bury on Saturday 12 October.

Bury only brought ten players so it looked like a good opportunity for Rochdale to get their heads down and increase their goal difference. However, despite being a player down Bury put up a good fight even when their tiredness was starting to show.

Rochdale were determined, showing some brilliant play with short, fast passes up the pitch to create multiple opportunities for a goal. Strong defending from Bury and a few wide passes limited Rochdale's goal count at first, but Gemma Hodcroft was able to start the goal scoring with an excellent reverse hit, and later with a second after retaining the ball from some back and forth in front of the goal.

A short corner presented an opportunity for Molly Barker to get a goal, but was denied by the whistle for a penalty as she nipped it over the line. Kie Leech stepped up to take the flick, and managed to sink it into the right side of the goal.

With most of the action happening in Bury's defensive end Rochdale were able to push up, with even defender Becky Moon having a well-intentioned shot on goal. Molly was able to snag a second goal opportunity to see her name on the goal sheet. Kie Leech was able to complete her hat-trick after the midfield were able to set her up nicely for her second, and this was followed by a rebound from Bury's defence that she sank into the bottom corner.  Even so Bury were able to worry the defense a few times, but solid play from Gill Owen, Kate Brammer and goalkeeper Sam Partington saw off their efforts.

Bury were trying to pile on the pressure but midfielder Jennie Ransome had other ideas. As Bury took a hit out Ransome pounced and intercepted the ball. She expertly took it past 2 defenders to score her first of the season.

With the ball cleared back into the opposing half the midfield and attackers were able to capitalise on sub Jenny Bank's fresh legs to secure a couple of quick goals.

A quick hit of the ball from defender Gill Owen was knocked on by Kie Leech to find its way to Jenny Banks in the top half, and she was able to smash the ball past the keeper.

Rochdale were able to keep their cool, tracking back well and keeping play simple but effective as Paula McDonald and Pickering used smart passes to create more opportunities in the D. Pickering managed to drive down the right hand side and found an opportunity for a goal. Even some cracking defending couldn't stop Jenny Banks finding a further two goals to add to her tally for the season.

The final score was 12-0 to Rochdale, with goal scorers; Hodcroft, Barker, Leech, Pickering, Ransome and Banks.