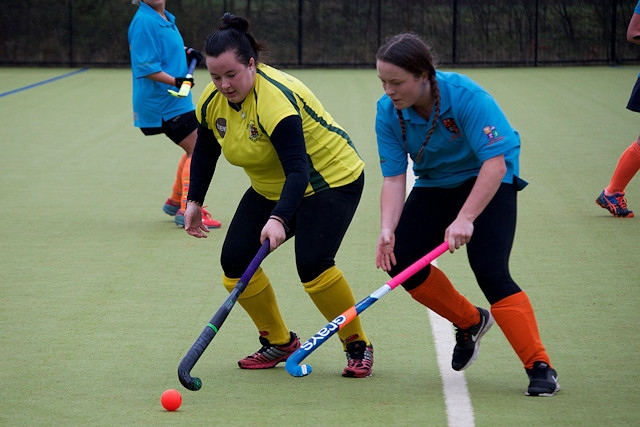 Rochdale kept pushing, with the attackers and midfield holding play where they wanted it

Rochdale Ladies were hoping to keep up their winning streak this Saturday (19 October), but an away match with no subs meant they would have to play smart for a win.

Rochdale gave away a couple of early short corners which allowed Urmston to take a two goal lead despite the valiant efforts of Gill Owen, Dionne Collinson, Hannah Palmer and Becki Moon, who, at all times worked tirelessly to keep the ball out of the Rochdale D.

Rochdale's confidence was knocked but not beaten and they managed to drive the play back into Urmston's defence to create their own opportunities. However, clumsy passes and good defending denied Rochdale any goals.

At half time frustrations and emotions were running high. A quick team talk reminding players to check before they passed got Rochdale bang on target early in the second half, as a fast bit of smart play from the midfield created an opportunity for Gemma Hodcroft, and she took it without hesitation to make the hit and land a goal in the left of the net.

Rejuvenated, Rochdale kept pushing, with the attackers and midfield holding play where they wanted it. A short corner saw the umpires give out reminders for behaviour, and unfortunately again, no goal for Rochdale. Katie Burrell did manage to catch a deflection off the keeper for a goal, but was denied by the whistle just before it landed.

Without a substitute Rochdale were beginning to feel the pace. Urmston were able to capitalise by winning some more short corners which allowed them to increase their lead. Rochdale, however, were not giving up, and the whole team continued to track, keep their passes snappy, and play smart.

Unfortunately it wasn't enough, and Urmston were able to increase their goal count with some excellent short corner shots. Another serious blow was dealt to Rochdale when a tackle saw a ball fly up and strike defender Dionne Collinson in the head. She was quickly seen to by team first aiders and a spectator with A&E experience and although she was okay, she sat out the rest of the match as a precaution.

Down to 10 players Rochdale braced for another short corner and whilst they kept their defending up, Urmston really shined in short corners, able to win a second to sink another goal.

The final score was 6-1 to Urmston, with Hodcroft as Rochdale's only goal scorer.

Captain Pickering said: “It was a tough first half for the team. Urmston were definitely the stronger side and we were surprised by their speed and strength. After the half time team talk we came out fighting and were by far the better side but unfortunately the damage had been done. I have no doubt the team will pick themselves up, train hard and get back to winning ways next week.”