Brown looks ahead to British Rallycross finale after Belgium disappointment 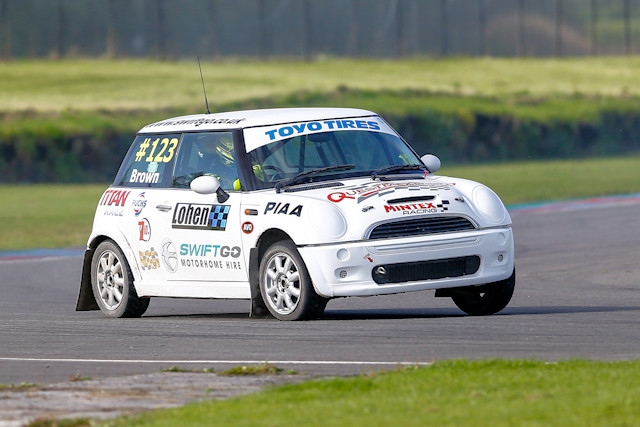 Rochdale driver Steve Brown will head to the final two rounds of the Toyo Tyres British Rallycross season this weekend, despite suffering an unfortunate end to his return to rallying last Sunday (20 October), ending the Hemicuda Rally in one of the infamous Belgium ditches.

Brown was offered the opportunity to drive the brand-new Rally Me BMW MINI on the Belgian event as part of an early development plan for the machine which will form a brand-new rally championship in 2020.

Developed by founder John Goff, the MINI was handed to Brown for the popular event which saw him contest his first stage rally since 2018 after making the switch to a full-time British Rallycross campaign, also in a BMW MINI run by the Bellerby Motorsport outfit. The aim of the Belgian outing was to offer feedback on the car’s performance and characteristics ahead of the MINI Challenge launch next year.

Sadly, the opening stage of the rally was cancelled which meant Brown’s first taste of the car would come over the second test of the event. A trouble-free loop before the first service of the day found Brown happy with the 20 kilometres covered.

“The car feels great and very grounded on first impressions,” he said.

“It certainly handles well and has plenty of potential, although I`m still learning it at the moment, so let's see what we can do on the next loop”.

But sadly, on the very next stage, the MINI’s rear wheel was pulled into a culvert, launching the car across the other side of the road and into retirement.

“Of course, I`m really disappointed to have only completed two stages in the car,” said a dejected Brown.

“Everything felt really good, but I just caught something on the side of the road and was a passenger from then on. There is plenty more to come from the car that for sure and I`m sorry to John and the Rally Me team for not getting it to the end. The 2020 Mini Challenge will certainly be one to watch”.

Brown won’t have much time to reflect on his stage rally return, as this weekend (26 – 27 October 2019) marks the closing rounds of the British Rallycross Championship at Croft in North Yorkshire.

Despite being in his rookie Rallycross season, Brown is currently lying in third overall in the BMW MINI Championship and has one eye on the podium positions as the season rounds out.

Brown said: “I have a great affinity with the Croft circuit as I made my rallycross debut there in 2017, so there are plenty of fond memories from the venue says.

“But it’s the first time the series has gone there this year so it will take a while to get back up to speed, although it’s the same for everyone I guess and there is plenty at stake too.

“Saturday and Sunday both offer points scoring chances and I really want to end my first season in the podium positions, but that will be a tall order. I don’t think I can catch second place but I'm only just holding onto third so I’ll need to gather all my experience from the season to secure that by the time Sunday night comes around.

“It would be a great way to end my first season, especially as this marks my 90th ever motorsport event.”