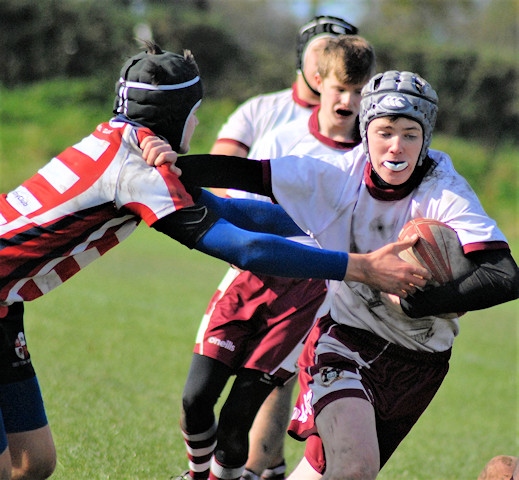 Rochdale welcomed Sefton to Moorgate Avenue on Sunday 20 October for the first time.

Sefton are a league above Rochdale in the Lancashire Challenge Cup so it was always going to be a tough challenge. The fixture had been hastily arranged after a couple of late cancellations. Both teams were weakened due to it being half term and Rochdale lent a player to Sefton so the game could remain 15 aside.

Straight from the kick off Sefton were on the attack with some straight running and good footwork gaining them large swathes of territory. Unfortunately, after one such break the Sefton centre twisted a knee and had to leave the field. This deprived Sefton a very dynamic runner and in addition reduced both sides to 14 players.

Rochdale slowly got themselves into the game with Garrett Myers and Nick Wright taking the ball into contact and the rest of the forwards ensuring quick ruck ball. From one such ruck Sefton were caught offside giving Rochdale chance to clear their lines. The kick however stalled in the wind and, with Rochdale expecting a lineout, they were unable to regroup when the winger fielded the kick and raced down the touchline to score in the corner. An excellent conversion embellished the score (0-7).

Rochdale had elected to play into the wind and attempt to contain their opponents much the same as they had against Sedgley Park the previous week and, as in the previous week Rochdale had conceded the first score. However, they stuck to the game plan and used the forwards to make inroads into the opposition and when space was available, released their backs. They were able to move down the field and gain a lineout in the opposition 22. Unfortunately, there was a knock on in the lineout and the scrum went to Sefton. The Rochdale pack made amends with a coordinated shove, thanks in no uncertain terms to new prop Charlie Roche who was having the better of his opposite number. The turn-over gave the Rochdale fly half Mitchell Holt time to run at a static defence and with a step and dummy he scythed through the defence to make the try line. The conversion was successful, and the scores tied (7-7).

Both teams play a very similar style of rugby, using their forwards to get over the gain-line before releasing the backs, and were now cancelling out each other’s attacking flair. The one difference with the forward carries was that Rochdale were getting to ground sooner and the ball always came back. Sefton were making more yardage but as often as not got isolated and either held up, thus conceding possession, or being turned over. This gave Rochdale the opportunity to gain field position in the Sefton 22 and, from a sustained attack, the ball was fed wide for Wright to scoop up and power through three would-be tacklers and over the line. Conversion missed (12-7). That was the final play of the first half and Rochdale would play with the assistance of the wind in the second half.

The second half was similar to the first but Rochdale used their kicking game better and were able to keep Sefton in their own half for long periods. Whenever Sefton relieved the pressure with a kick, it was run back by Ben Kershaw and Rochdale began to build pressure. As so often with pressure comes infringements. From a quick tap on the Sefton 22, Holt was able to make half a break; he was brought to ground but not held and, on regaining his feet, put in a couple of steps to wrong foot the defence before sprinting under the post for a converted try (19-7).

Rochdale persisted with the kicking game to gain field position and, after some further pressure, Myers took a short ball to crash through would-be tacklers and score next to the post for another converted try (26-7).

The scoreboard was going Rochdale’s way but it did not feel like Rochdale were dominating. Credit to Sefton who were still playing some good rugby and when they got their pick and go game up and running, it was difficult for Rochdale to combat. From a penalty in the home team’s 22, the Sefton centre was able to get to the edge of the defence and make the line. The conversion was unsuccessful (26-12).

From the restart Rochdale went back to their game plan and pinned Sefton back into their own half. From some good lineout ball and a nice kick through, Will Simmons almost got to the ball first but a Sefton boot kicked it dead giving Rochdale a 5-metre scrum. With a flanker missing, the ball shot out of the scrum but Matt Dearden reacted quickly to put Ben Kershaw on the outside of his opposite number. Despite a valiant double tackle from Sefton winger and back row the Rochdale winger made the try line to register the final score. (31-12).

New recruits Charlie Roche, Tom Shaw and Tom Drennan are all getting better by the week. Kai Potter had a great game around the pitch carrying and rucking, But MOTM went to Nick Wright for captaining the team and leading by example in both attack and defence.