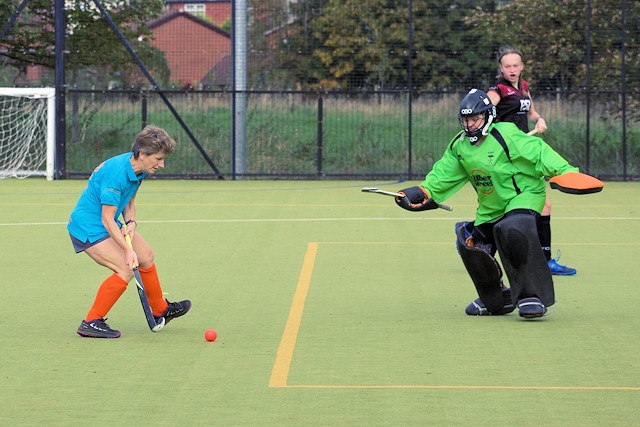 This weekend gave Rochdale a break from league matches, with an AD Cup match on Saturday (26 October) against a Bury team two leagues above them. Rochdale had a two-nil advantage before the game started and had twelve players ready to dig deep.

With that in mind Rochdale chose to play tactically, playing the game defensively with a 4, 5, 1 formation to give them the best chance at keeping their lead and the opportunity to take advantage of any breaks out of their area.

Bringing their A-game, and starting strong Rochdale showed it was Bury's match to lose, and with strong defending and nippy midfield play kept the play bouncing between ends. Unfortunately Bury were able to get a lucky goal about halfway through the first half, with the ball bouncing off a number of players and Rochdale's keeper Sam Partington before finally rolling over the back line just as defender Hannah Palmer got a stick to it.

After a number of short corners that were excellently defended - especially by Gill Owen and Kate Brammer - Bury were eventually able to capitalise with a second goal.

Rochdale were unperturbed, knowing they were playing well and that they still had a chance, and deciding to use free hits as an opportunity to push up the field. The second half started with Rochdale making a push to get their best opportunity for a goal yet, almost surprising Bury with their determination, but unfortunately no one was able to connect with it.

With Rochdale pushing higher Bury managed to break through a couple of times, but despite any tiredness Rochdale continued to track back and the pressure of the players shadowing them meant Bury were unable to get another goal. With Kie Leech, Roisin Pickering, Gemma Hodcroft and Jennie Ransome especially working the pitch hard. A series of repeat short corners finally gave Bury a goal to put them in front.

A sideline hit that switched play round the back gave Rochdale another great opportunity from Paula MacDonald driving it into the Bury defence with the help of Becca Newton and Katie Burrell, and after catching a couple of rebounds from the Bury defence, the ball eventually went wide of goal.

Bury's fitness was finally starting to get the better of Rochdale, and even Gill Owen's excellent stopping power was unable to prevent Bury from driving down the pitch and landing a fourth goal.

In the last quarter Alex Bedford made her season début to give Rochdale's defence some fresh legs, as Jennie Ransome and Gemma Hodcroft made another valiant attempt to get past the Bury defence Bury pushed back and after a sustained effort managed to land a fifth goal.

Captain Pickering said: "Today we displayed energy, teamwork, passion, commitment, unity, strength, spirit, fire and enthusiasm. Despite the result I'm proud to be part of this team and we can hold our heads high knowing how well we played against a team two leagues above us."