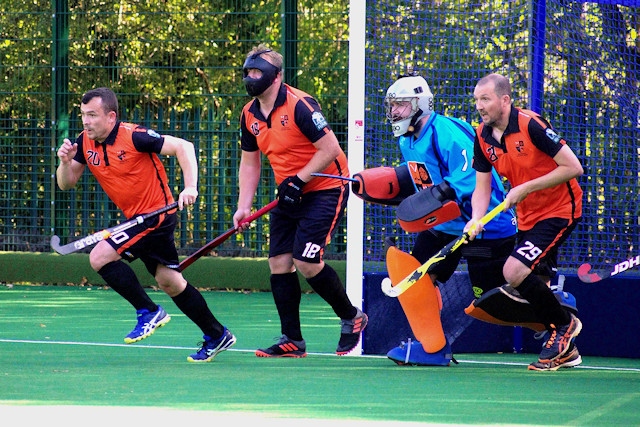 Rochdale's goalkeeper Jimmy Deacy was named man of the match

Rochdale Men's Seconds took on a youthful Wigton side at Oulder Hill on Saturday 26 October and the match started with a high tempo of end to end attacking and counter attacks.

Wigton who had made a 260 mile round trip, had some good chances early on but were unable to get the final ball or shot past on-form Rochdale goalkeeper and man of the match Jimmy Deacy.

Slowly, Rochdale began to get a grip on the game with some excellent pass and move plays through the midfield but were unable to convert them into what would have been an all important goal.

Towards the end of the first half Wigton applied some excellent pressure, winning a string of penalty corners. Some excellent defending from Rochdale meant the sides finished the half level at 0 - 0.

The second half started much as the first had begun, but Wigton started to attack with more energy down the centre as well as overloading the Rochdale wings. Rochdale's defence held out for as long as they could, but were eventually, overwhelmed by the sheer number of bodies Wigton were pushing forward. The ball was mobbed into the net following an excellent save from Deacy to give Wigton a 1 goal lead.

Rochdale continued to attack but didn't quite click for an all important equaliser. Wigton on the other hand became more confident in their attacks and managed to put another 2 in to give them a 3-0 lead. The last 15 minutes of the match was largely Rochdale's with Wigton content to do a half court press and hit Rochdale on the counter. Attacking play continued from Rochdale as they looked to fight for a way back in.

Unfortunately it was not to be and it finished as a 3-0 defeat to a side who will go top of the league should they win their game in hand. It was another hard game as it will be in this reshuffled division, with fine margins between victory and defeat.

One positive was that Rochdale's discipline held and no cards were shown. Hopefully Rochdale will bounce back to winning ways against Leyland and Chorley next week.

The Flying Horse Man of the match was named as Jimmy Deacy.