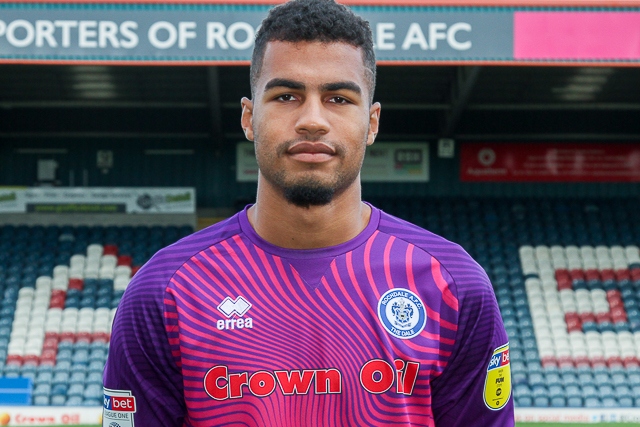 Rochdale travelled to Wrexham on Sunday (10 November) in the first round of the FA Cup but will have to do it all again after a stalemate in North Wales. The home side will feel they should have made it through to the second round after hitting the woodwork twice whilst Robert Sanchez made some important stops as Dale rarely threatened.

Brian Barry-Murphy made three changes to the Rochdale side that lost in midweek. Robert Sanchez and Rhys Norrington-Davies both returned from injury whilst MJ Williams had to be utilised as a central defender with Paul McShane missing through injury; Jimmy Ryan coming into the starting eleven.

Wrexham, who were relegated from the Football League in 2008, came into the game in the National league relegation spots but still have plenty of players in their squad with league experience. Former Dale striker Bobby Grant started against his former side.

The change around at the back brought confusion to the Dale defence and when MJ Williams and Eoghan O’Connell got in each others way; Bobby Grant had a clear sight of goal which he got badly wrong and his shot dragged wide.

The home side looked up for the game and went very close in the 12th minute. Ben Tollitt using his pace to burst along the edge of the area before unleashing a powerful shot that beat Sanchez but crashed back off the post.

Rochdale rarely tested Wrexham keeper Rob Lainton; Aaron Morley’s 22 yard free-kick flashing wide of the upright about the closest Dale would come in the first half. Matty Done did get a shot on target just before the break after a swift counter attack, but his shot lacked any kind of venom and was very comfortable for the keeper.

Wrexham bossed the first 15 minutes of the second half. Bobby Grant will feel he should have done better when he was picked out just ten yards from goal; his volley flying well wide with just Sanchez to beat.

The home side were convinced they should have had a penalty when Grant went down inside the area but referee Trevor Kettle was unmoved.

Half-time substitute Mark Harris fired a shot narrowly over just minutes after coming on whilst Grant nipped in to head a Jennings cross at goal, Sanchez bravely out to make the stop.

The National League side piled on the pressure and Akil Wright was denied by a brilliant full stretch save by Sanchez to keep the game nil-nil.

The woodwork once again came to Dale’s rescue late on in the game as Wright’s shot deflected off O’Connell and against the left hand upright as the home fans probably began to realise their luck wasn’t in.

Deep into stoppage time, Rob Lainton had his first meaningful shot to save when a 25 yard strike from MJ Williams was just about smothered behind for a corner ball as these two teams.

The date for the replay at the Crown Oil Arena has yet to be confirmed but will be in the week beginning Monday 18 November.