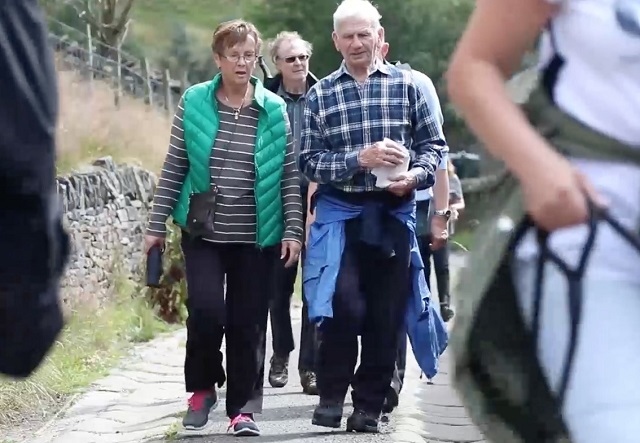 Gordon Aaron is in the running for the Changing Lifestyle Award

The eight winners named at the Rochdale Sports Awards in September have a shot at winning a regional award at the Greater Manchester Sports Awards on 15 November.

The Greater Manchester Sports Awards will take place on 15 November at The Point Emirates Old Trafford.

GreaterSport CEO Sara Tomkins said: “In Greater Manchester we are passionate that everyone has the opportunity to move more including taking part in an activity that suits them. The finalists at these awards do just that whether they’ve encouraged their colleagues, family, friends, pupils, community to be more active or directly provided opportunities for people to get involved this is our chance to recognise and thank them.”

The Rochdale Sports Awards were held at the Middleton Arena on 11 September and the winners on the evening who will now represent Rochdale at The Greater Manchester Sports Awards are:

Gordon has been married to his wife for 55 years and after making the difficult decision for her to move to a care home, has increased his walking and completed his second Manchester half-marathon this year at the age of 83.

The social aspect has helped take his mind off the struggles of dealing with his wife’s dementia, releasing endorphins and reducing stress. Gordon has inspired many others at Vets in the Community and the Walking Group to do more exercise.

Rochdale Hornets are a local charity inspiring more people to play rugby league more often. Working with community groups, schools, local clubs and the National Governing Body for the sport, RFL, they have coached over 14,000 schoolchildren. They have set up the only Women’s Rugby League Team and Wheelchair Rugby League Team in the borough whilst developing programmes aimed at South Asian Communities and over 35s.

Aged 15, Peter is the World Champion in kettlebell at 16kg and is training hard to progress to 24kg. He was European Champion last year and stays behind after school to train. He also plays a variety of sports to supplement his training, as he is thirsty to achieve more. Peter wants the best for others and works as a sports leader to inspire younger children to become more active.

Sheraz helps homeless people, Refugees and Asylum Seekers access sport provision at leisure centres, community centres, parks and open spaces. He regularly visits people who are struggling during evenings and weekends and gets them involved in positive activities such as swimming, family sports festivals and park activities. Sheraz inspires people of different ages, faiths and social backgrounds to volunteer and supports many into employment within sport and leisure.

Volunteer of the Year - Elham Afzal

A sports volunteer for several organisations, Elham has dedicated over 540 hours since September 2017. She volunteers for Manchester Futsal Club, British University League Taekwondo, GB Taekwondo, Tour De Manc, Street 2 Feet homeless football tournament, as well as at university. Setting up a campaign with her university sports teams, she held a charity drive for Barnados UK. Elham always volunteers to take part and lead any event or project and goes out of her way to help others.

Shirley has worked for Link4Life for 30 years and has set up 20 weekly Functional Fitness, Active Living, Cardiac Rehab and Cancer Specific programmes, and oversees five Walking Football sessions and The Active Ageing programme. Participants have now increased their weekly exercise levels, quality of life and overall health and wellbeing. Over 1,000 people benefit from Shirley’s area of work on a weekly basis.

‘Wake up and shake’ is carried out daily, lessons are taken outside where possible and additional specialists are brought in. PE is a focus on the timetable with all classes receiving at least two hours per week. Last year 95% of children participated in sport after school. The school has targeted disadvantaged children and children who are reluctant to stay for after school sports. The Sports coordinator consulted with those reluctant pupils and built a club around their needs.

The Greater Manchester Walking Football League enables individuals and teams to get back into football but at a slower pace. Each month 220 participants attend the league and take part. The league has created resilient habits for all so they not only improve their health and physical fitness but also increase their motivation, self-confidence and enable them to be part of a team again.