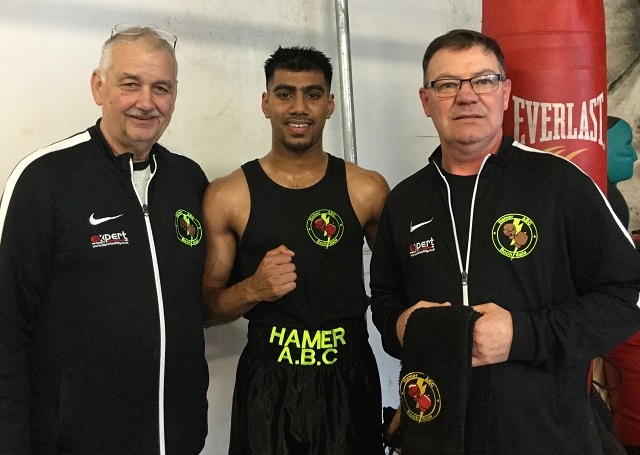 In the first round, Miah began by boxing on the back foot against his much taller opponent. Both boxers were looking for openings when suddenly Miah landed the first significant punch of the round, which was a solid right hand to the chin. Because of this, Sharkey began to back off which allowed Miah to move forward and take the initiative.

Throughout the round he continued to land his right hand and also the occasional left hook to the side of Sharkey's head.

By round two, Miah had found his rhythm and he continued to land right hand and combination punches on his opponent, who by this time was struggling to time his own punches as Miah moved in towards him.

The third and last round sealed it for Miah when the referee gave Sharkey a standing eight count after Miah landed numerous right hand blows to his chin, which gave Miah the win by unanimous decision to move into the semi-final.

Two days later, on 27 October, Miah travelled to Tameside Boxing Club in Stalybridge to meet Kai Pennington of Ashley VIP Boxing Club in the semi-final which turned out to be a hum-dinger of a fight with both boxers standing toe to toe in the middle of the ring unloading punch after punch upon each other.

By the third and last round Miah's fitness and momentum began to show which gave him the edge to be awarded the win and move onto the final.

Two other Hamer boxers also made it to the semi-finals at Tameside Boxing Club on 27 October but came up against two vastly experienced boxers.

Aeron Maddocks met the 60 fight veteran Kai Morley of Clayton ABC, whose experience showed in the end to give him victory in a very close bout.

Next to step into the ring for Hamer was Aman Hafeez who, with only four bouts to his name lost another very close decision as he stood toe to toe in a sensational fight against 56 fight veteran Joe McGuiness of Jimmy Egans Boxing Academy.

On Sunday 3 November, Monir Miah travelled to Tameside Boxing Club in Stalybridge once again to meet Max Curtis of Accrington Lions ABC in the 60-64kg Class C final of the NABGC Northwest Region.

From the start the much taller Curtis showed his intentions when he came out to take the fight to Miah with three or four solid right-hand punches to the face.

This set the tone of the bout, in which Miah struggled to find his momentum and although it was a very close bout, Curtis was in full flow from the very start which gave him the edge.

As the bout continued Miah began to unload punches before stepping in close to work the body and head and it was at this point where Curtis began to grab hold of his opponent which stifled the Hamer boxer's work.

The referee warned Curtis on numerous occasions, but he failed to act upon it, so Curtis continued to hold as Miah stepped in close and, as a consequence, Miah couldn't find his momentum which allowed Curtis to gain the victory.