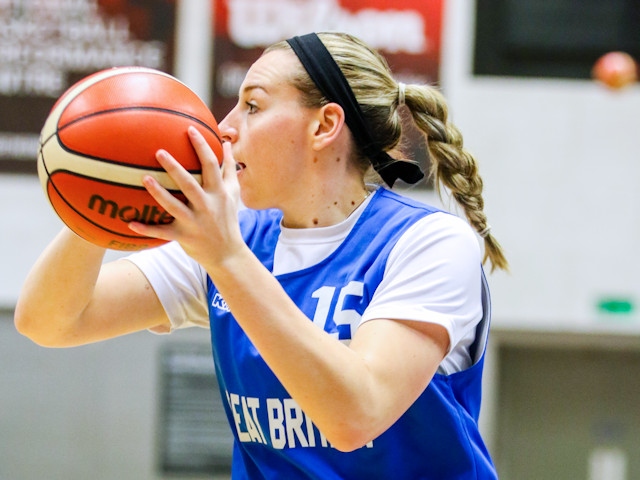 Whitworth’s silver Commonwealth medallist Mollie Campbell and the rest of Great Britain’s Women got their EuroBasket 2021 qualification campaign off to the best possible start as they beat Poland 75-63 in Walbrzych on Thursday (14 November).

Temi Fagbenle made an impact at both ends of the court for GB as Eilidh Simpson scored with 18 and Karlie Samuelson added 16 more.

GB raced out to an early lead thanks to six straight points from Samuelson (16 points, 8 rebounds, 4 steals) and when Chantelle Handy (11 points, 3 rebounds) splashed a triple for 9-0, Poland called for an early time out.

The break would allow the hosts to regroup and put together a 10-2 run of their own, but GB would end the first quarter the strongest to lead 21-14.

GB began the 2nd quarter without Fagbenle or Samuelson and quickly lost their way. An 8-2 Poland run put them right back in the contest, and the duo immediately returned.

The changes signalled a period of play where both teams lost their fluidity, with turnovers and poor offensive looks punctuating proceedings. Even the ever-reliable Fagbenle (15 points, 6 rebounds, 3 assists, 2 blocks) couldn’t find her range as the game went into a lull.

It would be Eilidh Simpson (18 points, 5/6 shooting, 4 rebounds, 3 assists) who would break the deadlock, hitting a pair of triples down the stretch to ensure GB finished the half on a roll, with the visitors leading 35-26 at the main change.

Helping GB to establish a double-digit lead in the 3rd quarter, Fagbenle began to shine at both ends of the court as an elite presence around the rim. Keeping Poland in check with a 2nd block of the game, her 10th point at the opposite end put GB up by 13 at 44-31, once again sending the hosts to a time out.

Poland put on a press to raise the tempo, but GB refused to slow as some slick passing led to a Handy corner three, keeping GB in front.

With Fagbenle and Samuelson both taking a seat towards the end of the 3rd quarter, GB wouldn’t make the same mistake twice as a 7-2 run and multiple trips to the foul line saw the visitors secure a 61-46 lead going into the last.

Poland began to double up Fagbenle in the low post but the veteran was wise to the move, dishing a nice pass out to Simpson on the wing for another triple, sapping the energy from the waning home crowd.

Poland would keep fighting in the game’s final minutes, but their deficit would never dip lower than double digits as Cheridene Green (11 points, 4/4 shooting, 10 rebounds, 3 assists) put the finishing touches on an impressive double-double performance.