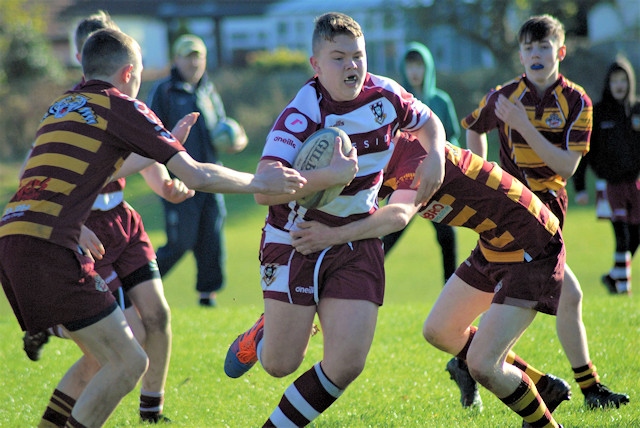 The third round of the Junior Lancashire Cup threw up a home challenge on Sunday 10 November for Rochdale against Sedgley Park, a team that Rochdale defeated earlier in the season. Rochdale started strongly, pressing in the opposition 22 and were awarded a penalty which Mitch Holt converted (3-0).

Rochdale were well aware of the threat out wide from some speedy Sedgley players and with the last half dozen games against Sedgley, if Rochdale could contain the sprinters out-wide they would be able to control the game. This they did comfortably for the first quarter, but it only takes one lapse and after a defensive mix up the Sedgley backs made space and the wide players did the rest for a converted try (3-7).

Rochdale went back to basics, controlling territory and possession and, after a well-judged clearance kick, Zak Baker brought the fullback to ground. Holt was first to arrive and secure the penalty for Rochdale when the defender failed to release the ball. Not satisfied with his initial efforts Holt took a quick tap and blistered over the white wash. The conversion was unsuccessful but Rochdale were on top (8-7).

From the kick off Rochdale went on the attack again and after some nice back play, the ball found its way to Tom Shaw just inside the Sedgley 22 metre line. Shaw beat one man on the outside, broke the next tackle and stepped inside the third defender to make the line. The conversion was successful and Rochdale were building a lead. That concluded the scoring for the first half (15-7).

The game continued to go Rochdale’s way and they scored next with another penalty. However, Sedgley are a constant threat with their speed and should not be underestimated. From another broken play situation, the Sedgley centre found the outside and outpaced the defence for a fine individual try taking the score to 18-14.

Unfortunately for Rochdale, and in a very similar fashion to the previous week, they switched off from the restart and defended too narrowly allowing another outside break and another 60-metre score (18-21).

In previous years this set back might have been the prelude to a collapse but the Rochdale players had other ideas. For the next fifteen minutes they totally dominated Sedgley; scoring three tries and silencing the away crowd.

First, Will Simmons rounded off a great attacking phase taking the scoring pass under the post for a converted try. Then Garrett Myers popped up in the centre to rumble over from 10 metres out unopposed. Finally, the coup de grace was added by Matt Dearden after the ball was turned over in midfield, transferred from Myers to Holt and back again, on to Isaac Reid and James Tasker before being delivered to Dearden on the wing to outpace the cover and dive into the corner, taking the final score to 35-21.

This was a much improved Sedgley team and a very competitive game.

Ollie Simpson and Ben Kershaw deserve a special mention for some excellent tackling of much bigger opponents.

James O’Connell was named man of the match for some good carries and incisive decision making.