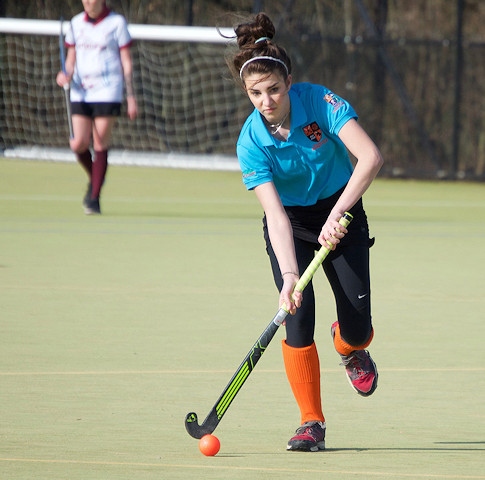 Back on home turf on Saturday 16 November, Rochdale played Horwich, a new team to the league.

Following on from a strong performance as a midfield winger last week, and against another defence heavy team, regular defender Becki Moon found herself playing out of position again. This week also saw defender Kate Brammer step up as captain for the weekend.

Horwich were starting without a couple of their regular players, which Rochdale was able to take advantage of, allowing them to showcase their skills and team work as they kept the attack strong with only a few breaks into Rochdale's defence, allowing most of the team to push up to keep the opportunities for goals coming after an early short corner.

The first half let Rochdale accumulate a five-nil lead, with Jenny Banks and Katie Burrell getting a total of three touch-and-go goals between them from multiple deflections and tackles within the D to finally slip it past the goalie.

After some great work from the midfield getting around the Horwich players Gemma Hodcroft was able to take a clean hit into the goal. Jenny Banks was able to make use of a great hit out from defender Gill Owen that allowed her to bypass most of the Horwich defence before taking a clear hit.

Despite the great start, Rochdale were feeling frustrated, but a half time team talk got their heads on straight, which is what they needed when Horwich had a couple of regular players able to join their team at half time.

That additional experience on Horwich's team meant that keeper Sam Partington had a bit more work to do in the second half, but she fended off their attacks well, something she managed effortlessly. The entire Rochdale team tracked up and down the pitch to respond well to the game, working their socks off to keep the opportunities for goals coming and to help defend to keep a clean sheet.

Katie Burrell got her second goal of the game with an excellent reverse deflection as she covered post. Jenny Banks landed yet another goal with an opportunity after getting around the defence.

The game ended just after midfield player Paula MacDonald managed to tap the ball in as the ball was passed to her across the D.

“Jenny Banks and Katie Burrell did a great job up front to capitalise on the opportunities in goal.

“Defenders Dionne Collinson, Kate Brammer and Hannah Palmer switched play around and pushed up with the midfield for support, defender Gill Owen was a strong force at the back to keep Horwich out of Rochdale's D and keeper Sam Partington made some great saves.”