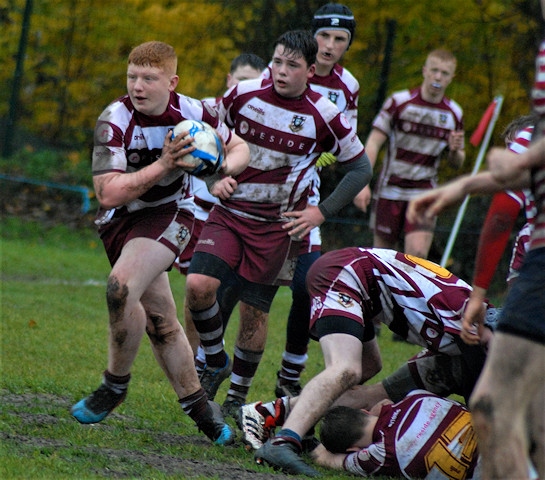 Hartley on the break

For the fourth round of the Junior Lancashire Cup, on Sunday 17 November, Rochdale were drawn away against Manchester RUFC.

Manchester had inexplicably been relegated from the top league the previous year and have shown in their first two matches that this may have been a mistake, scoring 20 tries and conceding no points in those two games. This was looking to be the sternest test of Rochdale's season.

Considering the poor weather, the pitch was in excellent condition and was possibly the largest area Rochdale have played on. It was obvious that the Manchester game plan was to move the ball wide at every opportunity to highlight the speed of their outside backs and exploit the wide open spaces. With this in mind, Rochdale’s game plan was to keep the ball tight amongst the forwards and use a defensive press when they were not in possession of the ball.

A strong start was imperative, and from the kick-off, James O’Connell set the tone with a barnstorming run through the heart of the Manchester defence. The pattern had now been set of Rochdale forwards’ punching holes in the Manchester defence and rucking and mauling to gain field position.

Rochdale camped in the opposition half for long periods but the Manchester defence held firm. It is impossible to totally dominate possession and, when Manchester did get some quick ball, they demonstrated why they are one of the best counter attacking teams in the county, scoring two tries from 60 metres out with the backs combining speed and agility with good hands and excellent support lines.

It would have been easy for Rochdale to become disillusioned, after dominating possession and territory only to fall behind on the scoreboard to a couple of counter attacks, but Rochdale did not let this affect them. They had the mind-set to cope with the challenge. Rochdale finally got their reward when, after another dominant scrum in the Manchester 22, Mitch Holt ran a blind side move. Ben Kershaw fixed his opposite number on the wing and Holt made the line for an unconverted try – the first points Manchester had conceded so far in the competition. Manchester scored again before half time and the teams turned with the home team 19-5 ahead.

At the start of the second half, Rochdale rotated their squad to ensure everyone got a game but this had little effect on the quality or style of rugby being played. The second half started with Rochdale again dominating possession and territory and this half was a much tighter affair. Manchester scored another long range try before Rochdale scored their second. After a period of sustained pressure in the Manchester 22, with Garrett Myers, Charlie Roche and others all carrying strongly. Rochdale were awarded a penalty. Holt fed Will Simmons who crashed between two defenders for the try that all his previous hard work had merited (26-10).

Rochdale were really dominating the forward battle now and, for the closing moments, were pressing the Manchester try line. Unfortunately, a lineout throw went astray and the opportunity was lost. Manchester scored the final try with the last play of the game (31-10). The score somewhat flattered the home team and their coaches were very magnanimous with their praise of the Rochdale forward effort.

What could have been a very one-sided affair was anything but and credit goes to both teams for an extremely entertaining game. Man of the match could have been awarded to any of the 23 players but Matt Dearden received the award for good service to the backs and some very timely tackles. Rochdale will have drawn a lot of confidence with this performance against a very strong Manchester side and they can now be competitive against any of the top teams.