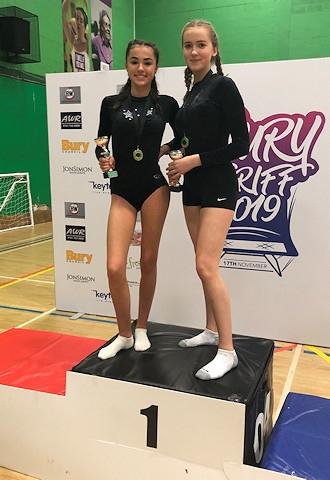 Izzy said: “Clubs came from all over including Liverpool, Bolton and Lancashire.

“I competed in the higher tariff under 14s competition. I was first in the team competition and third in the solo.”

She was in a team of three against other teams who had four and five members. The top three scores count towards the final result, but with only three members every point counted.

Izzy said: “I have done a lot of competitions and this was quite a hard one because of the standard of the other people taking part.”

Hannah competed in the lower tariff under 14s category which her team won and she was third in the solo,

Jade was not only first in the under 13s solo competition but also helped her team to first place too.

She said: “I have been trampolining for two years at Bury and I started because my friend went and I wanted to try it. I train for an hour on a Friday and two hours on a Saturday morning.”