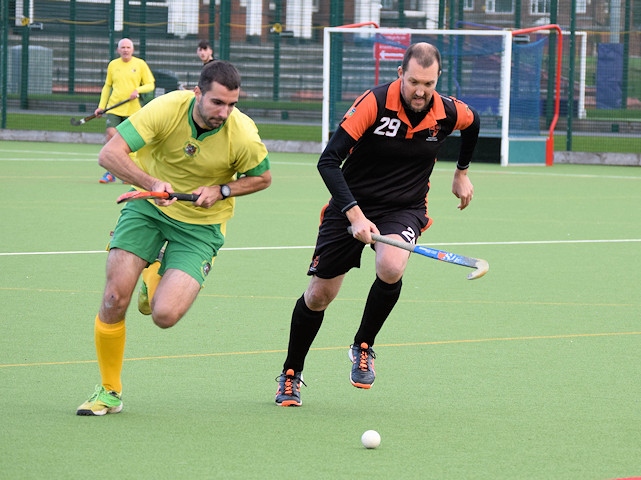 Saturday 23 November saw Rochdale take on Didsbury Northern Men's Fifths who had only been defeated twice in 9 games.

Rochdale, looking to cause an upset, started brightly with some strong attacks coming down both wings and some good one touch play through the centre. Didsbury, also determined to keep a winning run going, were showing Rochdale were not going to have all their own way. But it was not long before some calm heads and eyes for goal earned Rochdale a well deserved first goal.

Celebrations were short lived however, as Didsbury managed to win a quick penalty corner and after a bit of a scramble the ball squirmed its way to the back post for an easy tap in to level for Didsbury. Undeterred, Rochdale pressed on, enjoying long periods of the possession. Rochdale regained the lead from another goal mouth scramble, Ellis Barnes reading the play and anticipating the tap in at the back post for his second goal in as many games.

Rochdale kept up the pressure and maintained most of the possession in the Didsbury half. However Didsbury were managing to counter at pace. Unfortunately one such attack managed to find a Didsbury forward unmarked in the Rochdale D who swiftly converted to make it 2-2 at half time.

Rochdale kept the pressure on Didsbury in the second half whilst retaining a defensive formation to avoid the counters. Rochdale's forward line continued to create some chances and a good number of penalty corners but were unable to find that important breakthrough. As legs began to tire going into the last ten minutes, Didsbury started to push higher up the Rochdale lines and start to cause a few problems. These were largely dealt with by prompt interceptions from the Rochdale back line, but as the half wore on Didsbury started getting higher.

A clever and calm attack from Didsbury found them a way to break the deadlock. As an attack which penetrated down Rochdale's left, was pulled back out and switched to the centre which caught Rochdale's defence a little flat footed, allowing a free man on the back post for an easy conversation. With a little time to go Rochdale pushed forward for an equaliser but it was not to be, and the game finished 3-2 to Didsbury.

Captain Tim Liptrot said: "It was a tough game against an in-form Didsbury side. I think we enjoyed the majority of the possession, created some good chances and defended well in the main but were pipped by a fine margin. We just need to keep our standard of hockey improving and our work rates high going into next weeks game against South Manchester."

The Flying Horse Man of the Match, was the creative left half Dave Jackson.