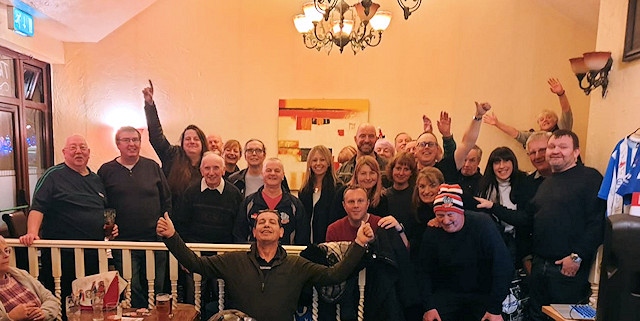 Independent supporters’ association, 100% Hornets, raised over £1,000 at their festive fundraiser

Rochdale Hornets' preparations for the forthcoming 2020 season were given a grand boost on Sunday (1 December), as the independent supporters’ association, 100% Hornets, raised over £1,000 at their festive fundraiser.

The event took place at the Albion Inn on Whitworth Road where supporters packed out the function room for an afternoon of fun. In addition to a quiz and an auction of some much sought-after vintage Hornets memorabilia, fans enjoyed a curry and ended the day with live entertainment.

A signed Great Britain Rugby League jersey was snapped up by one lucky fan for a generous £100.

This event not only exceeded the success of the end-of season fundraiser back in September which raised almost £900, it also took the amount raised this year over the £6,000 mark.

An association spokesperson said: "The generosity of our loyal supporters never ceases to amaze us. As we look to next season and beyond with optimism, it's vital that fans play their part in helping make the team as competitive as it can possibly be.

“We don't promise miracles, but what we do promise is that every penny we raise will go to our club."

In the year since its formation, the independent supporters' association has delivered an array of fundraising initiatives from bucket collections, auctions and social events to bag-packing events at Kingsway Morrisons, the site of Hornets' former home.

The next big fund-raising push takes place with a bag-pack at Morrisons this Sunday, 8 December – and all fans are invited to come along from 11am and help raise cash for the club.

The next official Rochdale Hornets club event is the Kids’ Christmas Party which takes place at the Crown Oil Arena on Sunday 15 December from 12 noon until 4pm.

The event is free and all fans are welcome.