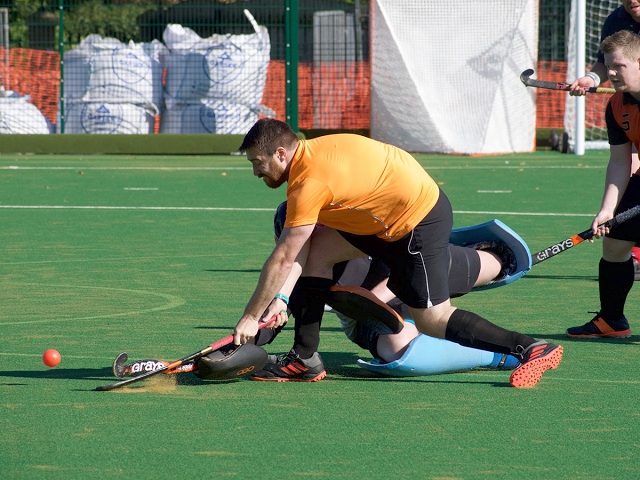 Saturday saw Rochdale Men’s Seconds take on Fylde Men’s Thirds in the last fixture before Christmas, which turned into a nice 5-0 Christmas present for Rochdale.

It didn't start as one sided as the final scoreline suggests with Fylde showing some quality upfront and forcing a few penalty corners early on with some skilful play.

Fylde were unable to capitalise however, and Rochdale started to get into the game as the first rotation of the days squad took effect. After a quick attack down the Fylde left, a long cross found its way to Kane Morgan who controlled the ball, dribbled past two challenges before calmly lashing the ball in the bottom corner with an accurate open stick strike.

Dropping to a half press again, Rochdale allowed Fylde some possession in their own half to take the sting out of the game. Allowing Fylde this extra time and space in their own half, but with little options up front frustrated the Fylde defence and after a few minutes Rochdale's leading goal scorer, Sean Carney seized on an opportunity, quickly stepped up the pressure and turned over possession in Fylde’s D and calmly doubled Rochdale's advantage.

Again, keeping calm and making sure Rochdale didn't give Fylde a cheap way back in, Rochdale dropped back and concentrated on keeping possession. Through keeping the shape and the ball moving Rochdale started again to advance higher and with quick skills in Fylde’s 23m area started to open them up again.

Another attack down the left, again led to the ball finding Morgan a few yards out on the back post, avoiding the temptation to try a first-time reverse stick strike, he collected the ball, brought it strong side and hit it back across the keeper to put Rochdale 3-0 up at half time.

Fylde were clearly wobbling, as their team talk could be heard by all.

Rochdale coach Aasim Choudhry didn't let it affect Rochdale though and made a couple of coaching points on penalty corners which would prove crucial in squashing the remaining Fylde resistance.

Going for more of the same in the second half, Rochdale dug in to stop Fylde’s spirited start. They again won several penalty corners but were unable to convert any of them. It wasn't long however before Rochdale had a penalty corner of their own, with a clever slip play from the training ground, captain Tim Liptrot was found open at the back post and converted for his second of the season.

Fylde were largely finished now as the game was surely beyond them, but to their credit they did keep battling to the end.

The last goal came from another penalty corner, a slip D top to Carney found him in space and he made it 5-0 with a measured open stick strike. Kane Morgan had a valiant effort at getting his hat trick with some wonderful 3d skills but was penalised for using the back of the stick.

Towards the end, Rochdale used their experience to run the clock down to ensure the clean sheet. It was a solid performance from Rochdale, who kept shape all game, defended well and attacked in a clinical controlled fashion.

The Flying Horse Man of the Match went to Kane Morgan for two decisive strikes which gave Rochdale a commanding lead.

Rochdale now have a short break over the Christmas period before hopefully returning refreshed and ready to go at it in the second half of the season in the beginning of January.