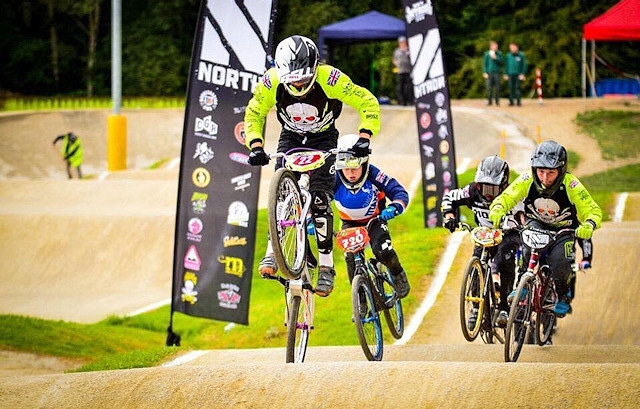 Dan Wilson out front in a BMX competition

Attending a party at Manchester’s Velodrome sparked an interest in BMX biking that will see Dan Wilson, from Norden, represent his country at the World Championships in Texas.

Dan, 14, is a student at Haslingden High School. He said: “I have been riding BMX bikes for five years and I ride for BMX Widow - a team based in Preston.

“I got into the sport when I attended a birthday party for my sister’s friend and it was the first time I had ridden a bike over jumps.

“From the party, I started attending local clubs in Heywood - Roch Valley Raiders - and then because I wanted to get extra coaching I moved to the club in Preston for training.

“I have always really liked riding my mountain bike, but I discovered it was a lot more fun riding a BMX.”

Dan qualified for the World Championships even though he broke his wrist at the start of the season meaning he missed several qualifiers.

He said: “You have to qualify in the top eight to get a place on the team. I broke my wrist in training for the pro-section at Manchester Velodrome; I was completing a gap jump and my foot came unclipped and I landed on my wrist.

“I was out for two months missing four out of the 12 qualifiers. However, I managed to get in the top eight for all the others apart from one when I was 11th leaving me in 10th place overall.”

That would have left him out of the team, but he was fortunate to get a wild card securing him a place in the team GB squad going to Texas in May 2020 to compete in the under 15s class.

Dan said: “I am very excited about going and my dad Scott will be going with me along with my coach, Ian Brooks.”

And he is not the only successful BMX rider in the family, Dan’s sister Aimee, 16, made it through to the World Championships last year in Belgium and was 26th.

He said: “My sister decided to try the sport out because I was doing it. She is doing her GCSEs this year when I will be taking part so she will be at home along with my mum.

“I am looking forward to getting two GB jerseys and having the chance to swap one with someone from another country. I would like to get a German or an Austrian jersey.