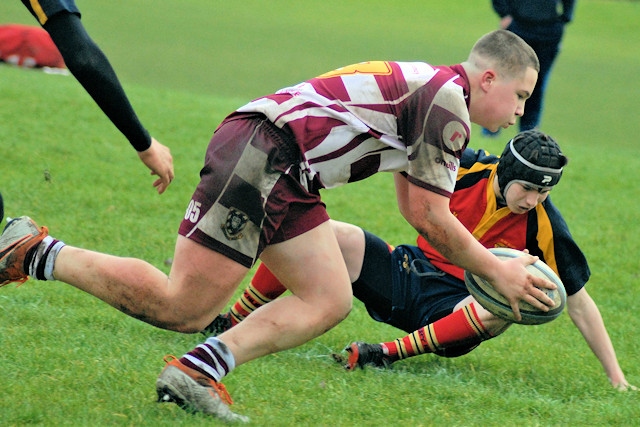 O'Connell in for the first try

Bury travelled to Rochdale on Sunday 8 December and it would have been easy to assume it was going to be a straight forward game based on recent results. Bury, however, are a much improved team and have added a competitive set of forwards to what was already a well drilled and very capable back line.

Rochdale started strongly and were able to pin Bury in their own 22. Despite this pressure, Rochdale were unable to convert their momentum into points and, as so often against backs with exceptional pace, they fell to a sucker punch when the Bury centre made an outside break and was able to fend off some very lacklustre tackling to score a try from 80 metres. Rochdale have learned to take these blows and bounce back, which is pretty much what they did.

After some concerted forward effort, the ball was moved quickly across the back line where Billy Pirouzan put James O’Connell through the gap, with a well-timed flat pass, to score. Rochdale went straight back about their business and, from a good catch and drive close to the Bury line, the ball was recycled a couple of times before finding its way to Mitch Holt who arced his run between the centres to score next to the post (12-7).

Rochdale were on the attack from the restart and, after good carries from Garrett Myers and Brad Rowley, the ball found its way to Danny Tomlinson on the left wing who, when taken to ground, managed to pop up a nice pass to Holt who scored in the corner (17-7).

This might have been the prelude to more Rochdale points but Bury’s forwards got them back into the game with some strong carries and a thundering run saw their large prop register their second try (17-12) and conclude the scoring for the first half.

In the second half, Rochdale, now playing down the slope and with the wind behind them, started to capitalise on strong running from their forwards and good tactical kicking to pin the Bury team back in their 22. Eventually the pressure told and, from a 5 metre attacking scrum, the Rochdale number 8, Nick Wright picked up and crashed over the line (22-12).

Bury would not lie-down though and, from another counter attack, their speedy winger found space on the outside and was able to brush off several would-be tacklers to race home from 70 metres (22-19).

Rochdale regrouped again and now began to dominate territory. From a quickly taken tap, Myers made good yards before feeding Holt on the outside who had enough pace to make the try line, taking the final score to 27-19.

It was a thoroughly competitive game between two well matched sides. Man of the Match was awarded to Brad Rowley who carried the ball extremely well, converting line breaks into large gains with every carry and putting in some telling tackles.