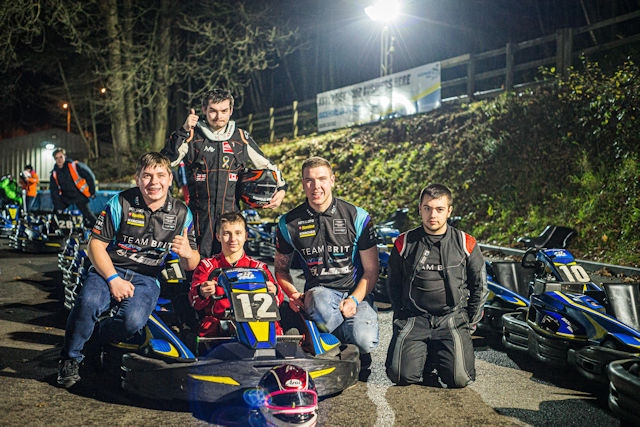 Each of the drivers live with autism, and have found that racing helps them cope with the challenges that the condition poses. Team BRIT Principal Dave Player formed Team Racing With Autism earlier this year, as an off-shoot of Team BRIT, to provide young drivers with autism with competitive karting opportunities.

The team lined up as part of a grid of 35 karts, with a very wet start to the race. The light weight of the younger drivers gave them a slight disadvantage on the slippery track, as they worked to keep the kart planted on the ground, but each of them pushed through and delivered against the odds during their stints. Jack suffers from severe arthritis, which was worsened by the cold conditions, but this did not deter him from giving his all for over an hour of racing.

Facing tough conditions, the team finished in an incredible sixth place out of 35, despite completing an extra pit stop, finishing only four laps behind the leaders and a full lap ahead of their closest contenders.

Matty is the CEO of TeamKarting, the UK’s highest rated indoor karting track, based in Castleton. He was diagnosed with dyslexia, dyspraxia and Asperger’s (a form of autism) when he was at school.  He went on to study motorsport engineering and secured a degree before raising investment to buy TeamKarting, becoming CEO.

TeamKarting is now the UK’s highest rated karting track and has won an award for being autism friendly.

Matty said: “This was a fantastic event – a real challenge for all of us – but a race in which we were determined to give everything.

“Some of our drivers are young, slight, and facing a number of challenges, but the determination they show on track is really incredible. We know that when we start a race we are seen as the underdogs, but by the end – we’ve shown what we’re capable of, and that’s exactly what happened at Buckmore Park.”