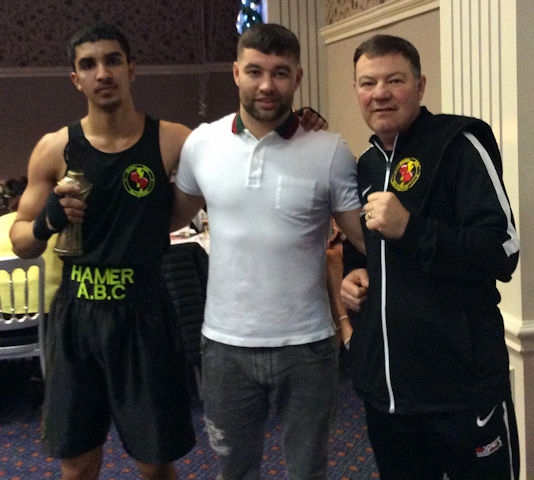 Shoukat, 18, came out for the first round looking to keep his distance whilst landing straight punches, but it was Metcalfe who set a fast pace, constantly forcing the Hamer boxer onto his back foot as he landed punches to the head.

Shoukat continued to try and land single punches but Metcalfe continually landed combinations to the head, forcing the Hamer boxer to retreat onto the ropes where he received yet more punches.

Shoukat was off balance on his feet as he moved away from his opponent, but as the round progressed, he managed to land the occasional power-punch which momentarily stopped Metcalfe in his tracks.

Before the start of round two, Shoukat's coach Steven Connellan told him that he was losing the bout and he should keep his punches long and straight, and throw them more frequently if he was to get back into the contest.

The bell rang and the Hamer boxer stepped into the middle of the ring to meet his opponent who came out on the back foot this time whilst looking to pick off the Rochdale lad.

The slowness of the round helped Shoukat: as he stepped forward, he threw a jab to the body before landing a scintillating right-hand to the chin. This immediately rocked Metcalfe and the referee administered a standing eight count to him before allowing the bout to continue.

Shoukat stepped forward with more purpose now and landed three more solid right-hand punches to the head. Metcalfe began to back off. Then he suddenly stormed forward throwing punches only to be met by another powerful right-hand to the face.

The Savick boxer ducked his head down in defence and he was met with a solid upper-cut. As his head sprang up into the air, the referee stepped forward once again to administer another standing eight count.

Shoukat had found his range by now and he landed another four or five powerful punches to the head before the bell rang to end Metcalfe's torment.

The Hamer corner expected Metcalfe to come out for the third and last round with more purpose and try and force the pace a bit more so the Hamer boxer was told to stay composed and to continue to keep his distance before unloading his right hand as his opponent stepped towards him.

The bell rang and the Rochdale boxer instantly landed another right-hand to the head which forced the referee to administer another standing eight count.

Shoukat continued to land power-punches as he stepped towards his opponent and all Metcalfe could do was try and push and hold the Hamer boxer.

At one point, Metcalfe grabbed hold of Shoukat's head guard: as a consequence, Shoukat struggled to see and immediately showed his frustration by dropping his hands. As he began to complain to the referee about what had just happened, Metcalfe continued to punch him in the face which resulted in the Hamer boxer receiving a standing eight count, as he was deemed not to be defending himself.

However, Shoukat had his hand raised in victory when he was awarded a unanimous decision.

After the bout, Shoukat received a compliment from the current British champion, Scott Fitzgerald, who was watching the bout.

Fitzgerald told the Hamer boxer that he had terrific power in his punches and, if he was to dedicate himself to the sport, then he would have a terrific future.